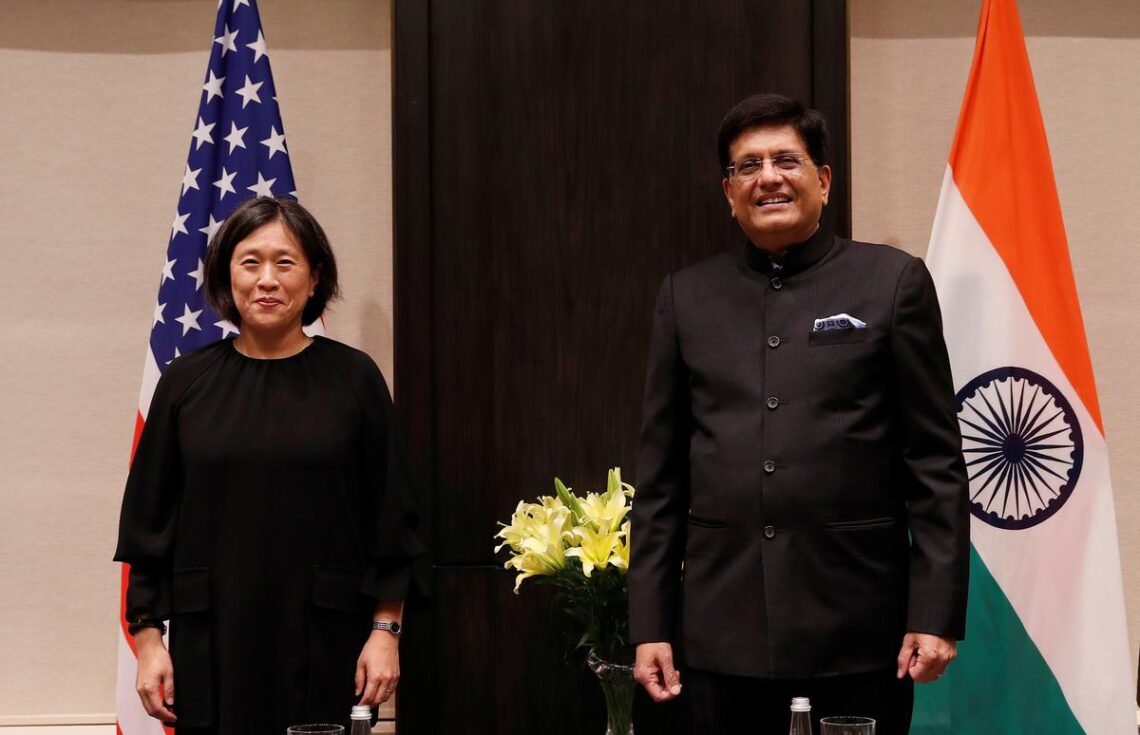 U.S. trade officials are arriving in New Delhi next week to finalise issues for discussion

U.S. trade officials are arriving in New Delhi next week to finalise issues for discussion

The U.S.-India Trade Policy Forum (TPF) has been scheduled for November 8 in Washington DC, The Hindu has confirmed. U.S. trade officials are arriving in New Delhi next week to finalise issues for discussion , an Indian government official told The Hindu.  A few weeks ahead of this meeting, it appears that that the gains are most likely going to be modest and incremental in the immediate future, given the structural differences in both economies and political considerations in India and the U.S. — both of which have general elections in 2024.

The 12th TPF was held in New Delhi in November 2021, after a hiatus of four years, delivering some gains over the past twelve months, such as the resumption of sales of Indian mangoes and pomegranate arils to the U.S. following the pandemic, and the appearance of U.S. cherries on the Indian market.

Officials from the Office of the U.S. Trade Representative (USTR), Christopher Wilson and Brendan Lynch, were in New Delhi in August – but the visit was not formally billed an ‘intercessional’.

Commerce Minister Piyush Goyal will lead the Indian delegation to Washington next month with the USTR, Katherine Tai, leading the American delegation.

On the Indian side, the requests are concentrated in the services sector, while for the U.S. side goods market access and the policy environment – such as data laws and now the imminent changes to India’s competition law- are of interest.

“A mismatch between bilateral ambition and sensitivity has been an issue at times. The U.S.’s ambitions are commensurate with what you would expect for a highly developed economy,” former Commerce Secretary Anup Wadhawan, who retired in 2021, told The Hindu via phone on Saturday.

He was referring to the U.S. interest in negotiating on agricultural and non-agricultural market access, digital trade, competition and so forth.

“We are a developing economy and have a number of sensitivities,” he added, pointing to the need, for instance, to protect agriculture, given the large low-income rural population that is dependent on it. “These needs need to be respected and factored in,” he said.

For India, many of the historical requests on services are met with responses from USTR that point to other wings of U.S. government, such as the Congress, or to other agencies and departments,  having ownership of the issue.

For the U.S. side, offering one to one market access for goods has been difficult.

“India has great access to the U.S. market,” a U.S. Government (USG) official told The Hindu, pointing to the lower tariffs in the US market.

Going into this year’s TPF , they are looking at “a number of products” in the agricultural space as “win wins”. Among these, for the Americans, is the resolution of exports of alfalfa hay to India – an issue that is pending from last year’s TPF, the official said. The U.S. is also keen to supplement India’s ethanol and DDGS ( an animal feed product) production, with its supplies, in light of India’s blending goals under the 2022 National Biofuels Policy.

For now, GSP had been of interest in previous rounds of talks. Former U.S. President Donald Trump , whose approach to trade was largely guided by differentials in overall trade balance, had taken India out of the program  in June 2019.

However, New Delhi  has recently signalled that the issue is no longer of significant interest. In Los Angeles last month for a ministerial meeting on the Indo Pacific Economic Forum (IPEF), a Biden administration initiative for the region, Mr Goyal had said that none of India’s exports were affected by the loss of GSP. He also said that the issue had been discussed in recent times.

“GoI continues to raise GSP, so it is of interest,” the U.S. official said.

For now, GSP is off the table because the program has itself expired for all countries and has to be reauthorized by the U.S. Congress. It did not make it into the CHIP and Science Act signed into law by U.S. President Joe Biden on August 9, having been in both Senate and House versions of bills that were precursors to this law (i.e., the Senate’s USICA bill and the House of Representatives’ America Competes Act).

“GSP is an important trade program, and the Committee has been continuously working to renew it,” Dylan Peachey, a spokesperson for the House Ways and Means Committee, told The Hindu on Friday.

But with so much uncertainty around how a lame duck Congressional session ( i.e, post the U.S. midterm elections of November 8) would look, it is unlikely GSP will pass this year, but may, instead be taken up early next year, a source familiar with the issue said.

India has also historically wanted the U.S. to reduce its fees on visas for highly skilled workers (H1-B and L ) as well as to increase the number of H1-B visas. More recently , since the pandemic,  extraordinary visa wait times have become an issue, frustrating work plans and keeping families apart.

Visa wait times were raised by External Affairs Minister S Jaishankar in his bilateral talks with U.S. Secretary of State Antony Blinken on September 27 in Washington DC. Mr. Blinken had said he was “extremely sensitive” to the issue and the U.S. Embassy in India tweeted on Friday that it was prioritizing H and L visa appointments.

The longstanding desire of India to finalize a social security totalization agreement has also come up against  U.S. policy challenges or the structure of organizational ownership for the issue within the U.S. government (such as the Social Security Administration, and not USTR, leading on it). Such an agreement would allow Indians in the US paying into the system via taxation to receive benefits when they move back to India.

It is unlikely an agreement will be finalized soon but there is ongoing engagement, as per the USG official.

The sums involved are large — in the ballpark of over  $1 billion paid in per annum by Indian professionals in the U.S .

“The annual social security contributions in  the U.S. by Indian professionals is large. While this cannot be a valid ground for the adopted U.S. stance, the fact remains that the U.S. Social Security system can’t afford to let it go,” Mr Wadhawan said.

“Contentions like the technical objection that India doesn’t have an equivalent Social Security system from which they can ask back for the money are also no longer valid,” he said, referring to the U.S. requirement that the country with which it has such an agreement have a comparable universal social security system

There seems to be some shift in the understanding , with the Biden administration’s approach to trade, that India and the U.S. are in significantly different policy spaces — an issue that both sides keep running up against in rounds of talks.

India has opted out of the trade pillar of the administration’s Indo Pacific Economic Framework (IPEF), joining instead the pillars on fair economy, supply chains and clean economy.

“Honestly it’s the right position for India,” the USG official said, as these aren’t issues India has traditionally included in trade agreements. “Let’s build confidence bilaterally via the TPF and we can consider the IPEF trade pillar later,” the official said.

Weaving their lives around sewage arrival