Ukraine, Russia have to return to path of diplomacy, dialogue: India at UNSC meeting 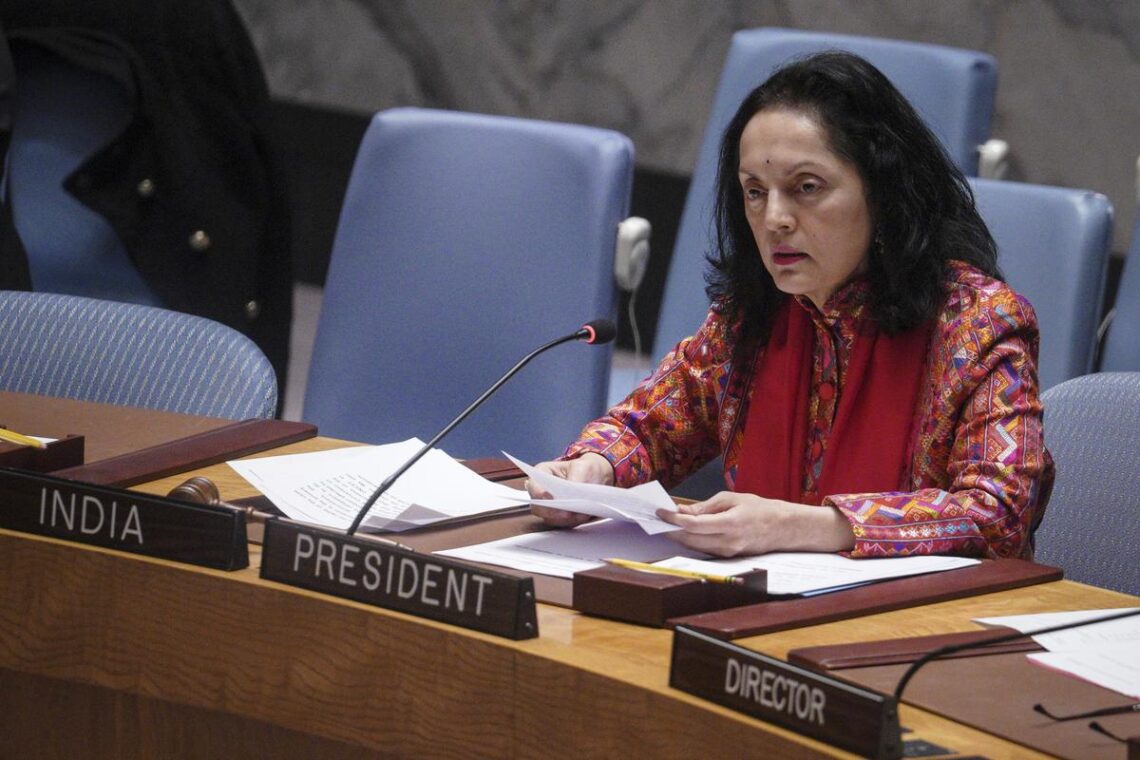 
India’s Ambassador to the United Nations Ruchira Kamboj, current president of the U.N. Security Council, address the council after a report on the humanitarian impact of Russia’s war in Ukraine, Tuesday Dec. 6, 2022 at U.N. headquarters.
| Photo Credit: AP

India has consistently called for an immediate cessation of hostilities and has urged Ukraine and Russia to return to the path of diplomacy and dialogue, India’s Permanent Representative to the U.N., Ruchira Kamboj said.

While addressing the U.N. Security Council meeting on Ukraine: Protection of civilians and the situation of children, Ms. Kamboj said, “India has consistently called for an immediate cessation of hostilities and an end to the violence. India has called upon both sides to return to the path of diplomacy and dialogue, and also expressed its support for all diplomatic efforts to end the conflict.”

“We believe that no solution can arrive at the cost of innocent lives. Our Prime Minister has spoken to the Presidents of Ukraine and Russia on multiple occasions and reiterated India’s position. India stands ready to support all such efforts aimed at de-escalation,” she added.

Talking about the Ukraine situation, Ms. Kamboj said that India has remained concerned about the situation in the country. She further stated that the conflict has resulted in the loss of lives and countless miseries for its people, particularly for women, children, and the elderly, with millions becoming homeless and forced to take shelter in neighbouring countries. Reports of attacks on civilians and civilian infrastructure in recent weeks are deeply worrying.

Recalling India’s efforts in providing humanitarian assistance to Ukraine and other low-income countries which are affected by the Moscow-Kyiv war, Ms. Kamboj said, “We are providing humanitarian assistance to Ukraine and economic support to some of our neighbours in the Global South under economic distress.” “To help low-income countries fight against price rise and shortage of foodstuffs, India has exported more than 1.8 million tons of wheat to countries in need, including to Afghanistan, Myanmar, Sudan, and Yemen,” she added.

Also read | Neutrality and abstention: On India’s stand in the Russia-Ukraine conflict

She also said that the impact of the Ukraine conflict is not just limited to Europe. The conflict is exacerbating concerns over food, fertilizer, and fuel security, particularly in developing countries. It is necessary for all of us to appreciate the importance of equity, affordability, and accessibility on these critical issues for the Global South. Open markets must not become an argument to perpetuate inequity and promote discrimination.

Children constitute a third of humanity – the most important third, as they are the future of the world. Children are also the most vulnerable to suffering, particularly in situations of armed conflict, and therefore need additional protection and care. The conflict in Ukraine is no doubt severely impacting the 7.5 million children across Ukraine, Ms. Kamboj said.

“While the protection of the rights of the child, including their access to education is the primary responsibility of the national government, the international community has the obligation, to do its utmost to provide succour to children affected by conflict. India is a signatory to the Convention on the Rights of the Child and is appreciative of the ongoing efforts including that of UNICEF to alleviate the sufferings of the children. We also support UNICEF efforts to scale up its operations,” India’s envoy to the U.N. said.

During her address, Ms. Kamboj recalled the foreign student situation in Ukraine and said, “India facilitated the safe return of 22,500 Indian nationals, most of them students, studying in various universities in Ukraine. We are exploring options to minimize the impact on our students’ education. We appreciate the relaxations made by the Ukrainian government for this academic year in respect of medical students.”

It is pertinent to mention that India had launched ‘Operation Ganga’ to bring back Indian nationals stranded in Ukraine after Russia’s invasion. Ms. Kamboj hoped the international community will continue to respond positively to the call for humanitarian assistance. India has so far dispatched 12 consignments of humanitarian aid to Ukraine. At the request of the Ukrainian government, India has also provided financial aid for the reconstruction of an educational institution, Ms. Kamboj said during the UNSC meeting.