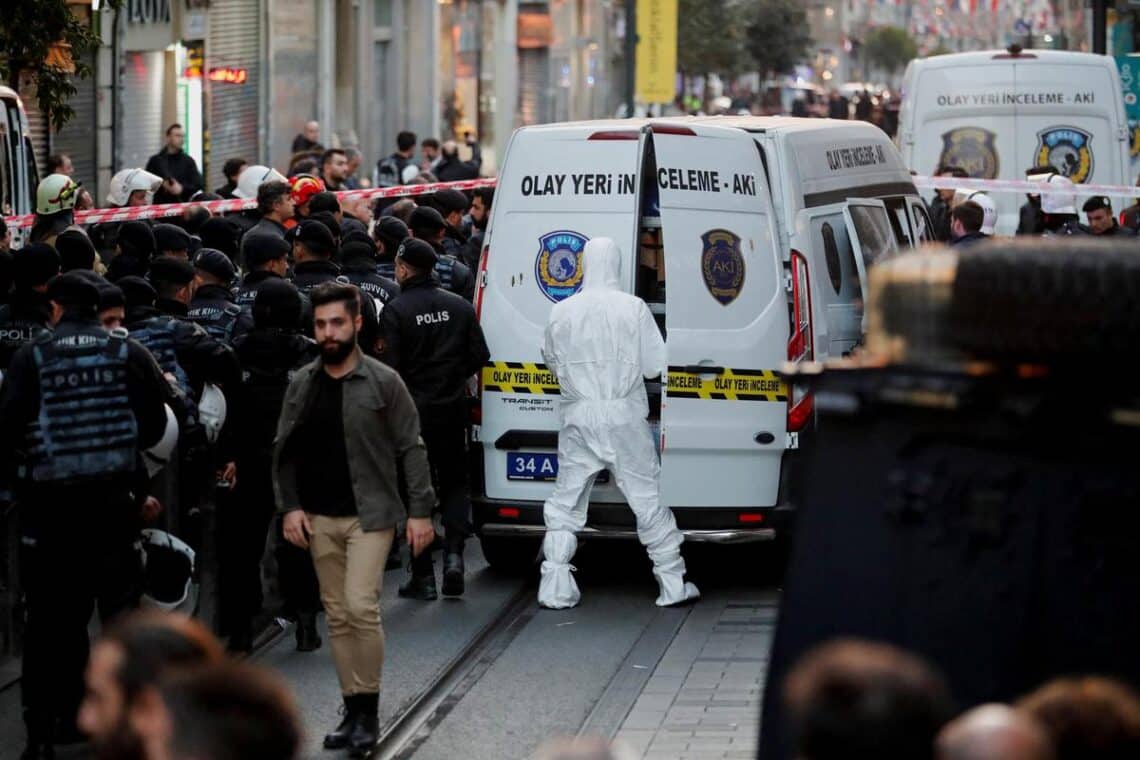 An explosion tore through a busy Istanbul shopping street on November 13, killing six and wounding dozens in what Turkey’s president said bore the signs of a terror attack.

Police cordoned off an area around Istiklal, where crowds were dense on Sunday afternoon, and helicopters flew over the city centre as sirens sounded.

“I was 50-55 metres (yards) away, suddenly there was the noise of an explosion. I saw three or four people on the ground,” witness Cemal Denizci, 57, told AFP.

“People were running in panic. The noise was huge. There was black smoke,” he said.

“It might be wrong if we say for sure that this is terror but according to first signs… there is a smell of terror there,” Mr. Erdogan told a press conference.

India conveyed its “deepest condolences” to Turkey “Our sympathies are also with those who sustained injuries. We wish them a speedy recovery,” tweeted Minister of External Affairs spokesperson.

Authorities offered few details and no groups immediately claimed the blast, but Turkish cities in the past have been struck by Islamists and other groups.

Istiklal Avenue had already been hit in the past during a campaign of attacks in 2015-2016 that targeted Istanbul and other cities including the capital Ankara.

Those bombings were mostly blamed on the Islamic State group and outlawed Kurdish militants, and killed nearly 500 people and injured more than 2,000.

Sunday’s explosion occurred shortly after 4:00 pm (1300 GMT) in the famous Istiklal shopping street which is popular with locals and tourists.

According to images posted on social media at the time of the explosion, it was accompanied by flames and immediately triggered panic, with people running in all directions.

A large black crater was also visible in those images, as well as several bodies lying on the ground nearby.

According to an AFP video journalist on the scene, police established a large security cordon to prevent access to the damaged area for fear of a second explosion.

Istiklal in the historic district of Beyoglu, is one of the most famous arteries of Istanbul, entirely pedestrian on 1.4 kilometres (nearly a mile).

Criss-crossed by an old tramway, lined with shops and restaurants, it is used by large crowds during the weekend.

In the neighboring district of Galata, many stores closed early while some passers-by, who came running from the site of the explosion, had tears in their eyes.

A massive deployment of security forces equally barred all entrances, while a heavy deployment of rescue workers and police were visible.

A reaction came quickly from Greece, which “unequivocally” condemned the blast and expressed condolences to the government and people of Turkey.

Palaniswami wants ₹30,000 an acre as compensation to farmers for rain-affected crops