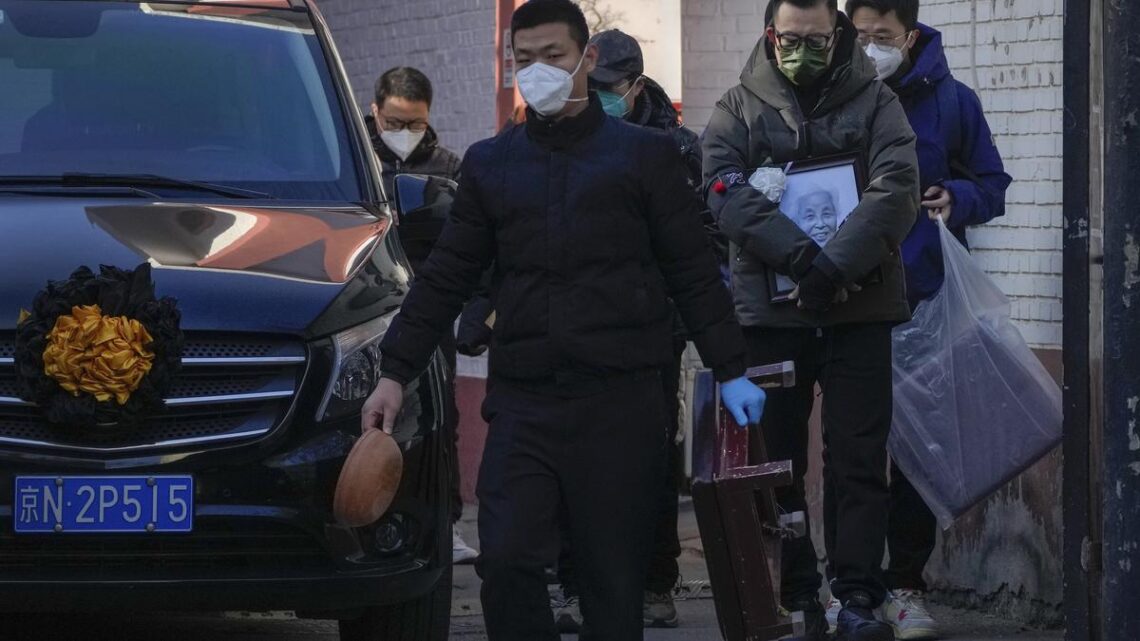 
A family member carrying the photo of a deceased relative walks beside a vehicle carrying the body outside a fever clinic in Beijing on December 19, 2022. Chinese health authorities on Monday announced two additional COVID-19 deaths, both in the capital Beijing, that were the first reported in weeks and come during an expected surge of illnesses after the nation eased its strict “zero-COVID” approach.
| Photo Credit: AP

China reported its first COVID-related deaths in weeks on December 19 amid rising doubts over whether the official count was capturing the full toll of a disease that is ripping through cities after the government relaxed strict anti-virus controls.

Monday’s two deaths were the first to be reported by the National Health Commission (NHC) since December 3, days before Beijing announced that it was lifting curbs which had largely kept the virus in check for three years but triggered widespread protests last month.

Though on Saturday, Reuters journalists witnessed hearses lined up outside a designated COVID-19 crematorium in Beijing and workers in hazmat suits carrying the dead inside the facility. Reuters could not immediately establish if the deaths were due to COVID-19.

“What is the point of incomplete statistics?” asked one user. “Isn’t this cheating the public?,” wrote another.

The NHC did not immediately respond to a request for comment.

The low number of deaths since curbs were lifted on December 7 is inconsistent with the experience of other countries after similar moves. Officially China has suffered just 5,237 COVID-related deaths during the pandemic, including the latest two fatalities, a tiny fraction of its 1.4 billion population.

But health experts have said China may pay a price for taking such stringent measures to shield a population that now lacks natural immunity to COVID-19 and has low vaccination rates among the elderly.

Some fear China’s COVID death toll could rise above 1.5 million in coming months.

Chinese news outlet Caixin on Friday reported that two state media journalists had died after contracting COVID, and then on Saturday that a 23-year-old medical student had also died. It was not immediately clear which, if any, of these deaths were included in official death tolls.

“The (official) number is clearly an undercount of COVID deaths,” said Yanzhong Huang, a global health specialist at the Council on Foreign Relations, a U.S. think tank.

That “may reflect the lack of state ability to effectively track and monitor the disease situation on the ground after the collapse of the mass PCR testing regime, but it may also be driven by efforts to avoid mass panic over the surge of COVID deaths,” he said.

China’s stocks fell and the yuan eased against the dollar on Monday, as investors grew concerned that surging COVID-19 cases would further weigh on the world’s second-largest economy despite pledges of government support.

The virus was sweeping through trading floors in Beijing and spreading fast in the financial hub of Shanghai, with illness and absence thinning already light trade and forcing regulators to cancel a weekly meeting vetting public share sales.

Japanese chipmaker Renesas Electronics Corp said on Monday it had suspended work at its Beijing plant due to COVID-19 infections.

A survey by World Economics showed on Monday China’s business confidence fell in December to its lowest since January 2013. China’s economy is expected to grow 3% this year, its worst performance in nearly half a century.

China’s chief epidemiologist Wu Zunyou on Saturday said the country was in the throes of the first of three COVID waves expected this winter, which was more in line with what people said they are experiencing on the ground.

“I’d say 60-70% of my colleagues…are infected right now,” Liu, a 37-year-old university canteen worker in Beijing, told Reuters, requesting to be identified by his surname.

Beijing will speed up imports of COVID medicines amid shortages in the city’s pharmacies, another official said.

While top officials have been downplaying the threat posed by the Omicron strain of the virus in recent weeks, authorities remain concerned about the elderly, who have been reluctant to get vaccinated.

China’s vaccination rate is above 90%, but the rate for adults who have received booster shots drops to 57.9%, and to 42.3% for people aged 80 and above, government data shows.

In the Shijingshan district of Beijing, medical workers have been going door-to-door offering to vaccinate elderly residents in their homes, state news agency Xinhua reported.