Fall in immunisation may have triggered measles outbreak 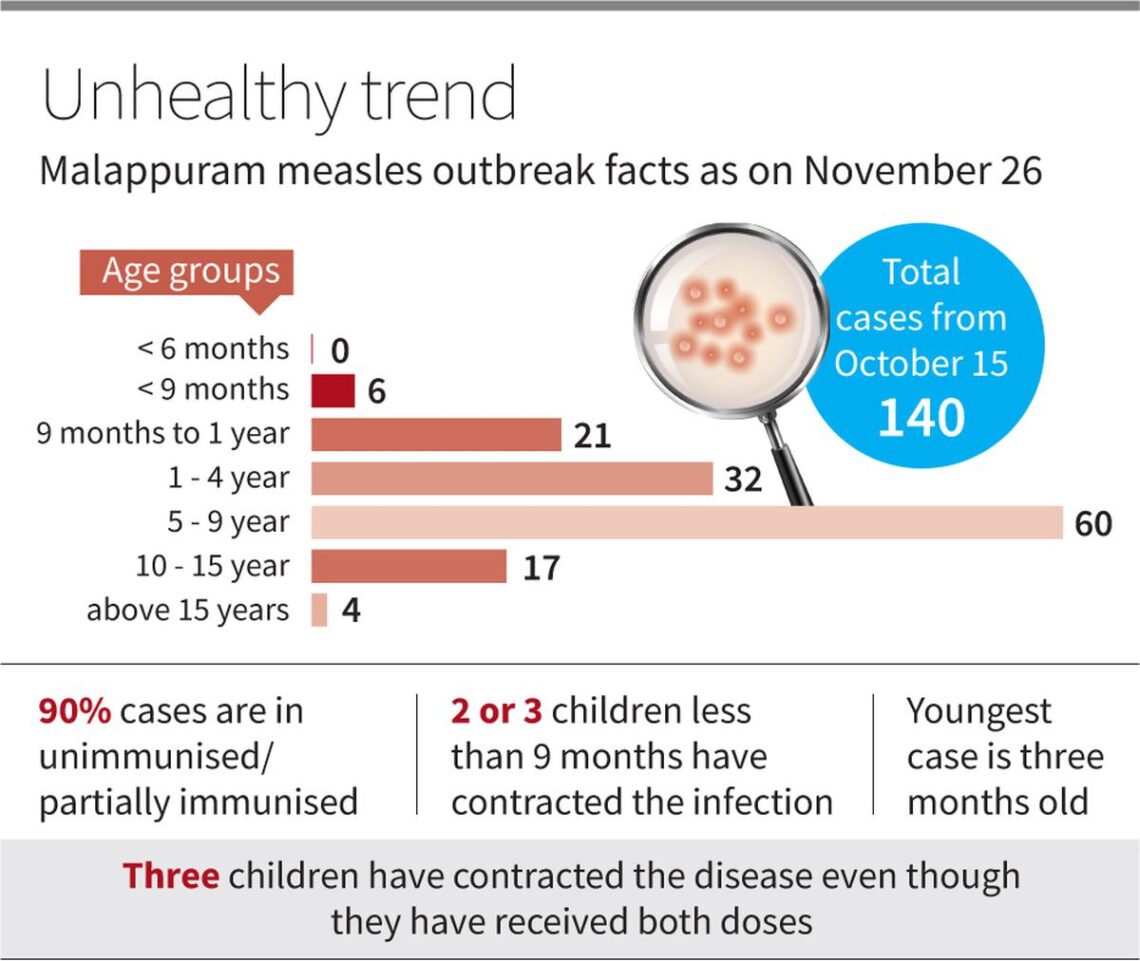 
Fall in routine immunisation activities during the pandemic might have significantly contributed to the current outbreak of measles at Malappuram. However, public health experts have cautioned that the goal of eliminating measles-rubella by 2023 might not become a reality unless the Health department looks beyond the obvious to study the altered epidemiology of the disease in the State.

Cases have been reported in all age groups, including in children as young as three months of age and in older adults too. Health officials said that there were three cases wherein children who had received both doses had contracted mild disease. They reasoned that these children might have contracted the virus before the second dose’s protection kicked in . Epidemiologists however cautioned that even a single case of a fully immunised child getting measles should not be discounted because the measles vaccine was a powerful one.

In the last two years ,there were no measles outbreaks anywhere in the State because of decreased interactions between people and the mask mandates, which naturally cut down the transmission of all respiratory viruses.

“This outbreak should not be seen as a problem confined to Malappuram. The flare-up happened in Malappuram first because of obvious reasons. The experience of 2018-19 tells us that the epidemiology of measles is altering in the State and that many unknowns are emerging. Measles is historically a childhood disease but susceptible cohorts ( people who are vulnerable to contracting the virus) can be found in all age groups in other districts too because the measles vaccination coverage in the State hovers around 80% . Hence, smaller outbreaks may be expected across the State,” a senior public health expert said.

In 2018-19, the pattern of global resurgence in measles was reflected in Kerala also, with the State reporting over 600 cases in the first four months of the year alone. However, the majority of the cases were reported from Thiruvananthapuram, a district which has always had good vaccination coverage. Cases were reported amongst people who are well-nourished and who have received at least one dose of vaccine in their lifetime. A chunk of the cases were in the 19-35 age group, with 60% requiring hospital admission, including ICU care.

The reporting of measles in older adults and in infants as young as three months of age, when maternal antibodies are supposed to protect them, raises many concerns. This apparent age shift in infection also raises questions about the right age of immunisation for children and if a third dose is required to protect adults, who could suffer from serious complications following measles infection.

“In the post-Covid phase, we do not know how the measles virus will behave in older adults. Measles in early infancy even before the child is of vaccinable age is something that requires deeper study. Do we start measles vaccination at an earlier age? Given the age shift in infection, is it better to give an additional vaccine dose to adults too, especially young women, are issues that need to be studied,” says K. Purushothaman, former head of Paediatrics, Thrissur Government Medical College.

Interestingly, a study (Indian Paediatrics 2021) carried out by SAT Hospital, Thiruvananthapuram, and Rajiv Gandhi Centre for Biotechnology among 80 children of age 4-12 years in 2017 had thrown up the finding that 13.6% of children who had received both doses of measles vaccine in infancy had no protective measles-specific antibody titres at 7-8 years of age .

“The measles outbreak at Malappuram should be seen as an opportunity by the State to adopt the research mode and delve deep into the emerging unknowns. Depending solely on improving routine immunisation may not get us to Measles elimination by 2023,” a public health expert said.