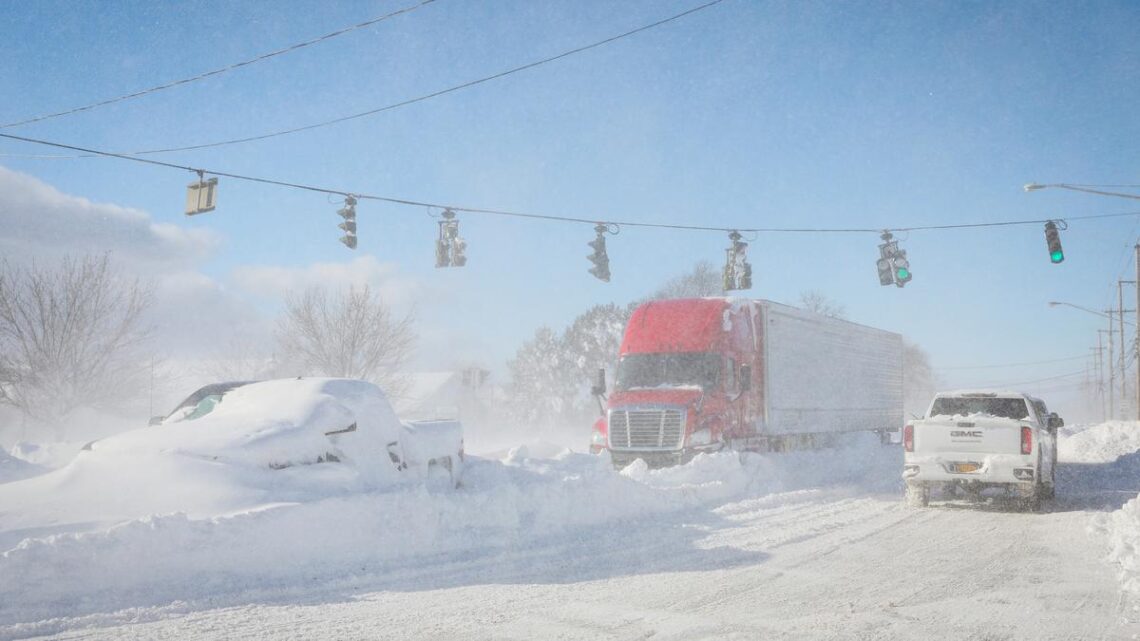 
Millions of people hunkered down against a deep freeze on Sunday to ride out the winter storm that has killed at least 34 people across the United States and is expected to claim more lives after trapping some residents inside houses with heaping snow drifts and knocking out power to tens of thousands of homes and businesses.

The scope of the storm has been nearly unprecedented, stretching from the Great Lakes near Canada to the Rio Grande along the border with Mexico. About 60% of the U.S. population faced some sort of winter weather advisory or warning, and temperatures plummeted drastically below normal from east of the Rocky Mountains to the Appalachians, the National Weather Service said.

Travelers’ weather woes are likely to continue, with hundreds of flight cancellations already and more expected after a bomb cyclone — when atmospheric pressure drops very quickly in a strong storm — developed near the Great Lakes, stirring up blizzard conditions, including heavy winds and snow. Some 1,707 domestic and international flights were canceled on Sunday as of about 2 p.m. EDT, according to the tracking site FlightAware.

The storm unleashed its full fury on Buffalo, with hurricane-force winds and snow causing whiteout conditions, paralyzing emergency response efforts. New York Gov. Kathy Hochul said almost every fire truck in the city was stranded Saturday and implored people Sunday to respect an ongoing driving ban in the region. Officials said the airport would be shut through Tuesday morning. The National Weather Service said the snow total at the Buffalo Niagara International Airport stood at 43 inches (109 centimeters) at 7 a.m. Sunday. A snow plow is left stranded on the road following a winter storm that hit the Buffalo region on Main St. in Amherst, New York, U.S., on December 25, 2022.
| Photo Credit:
Reuters

Daylight revealed cars nearly covered by 6-foot snowdrifts and thousands of houses, some adorned in unlit holiday displays, dark from a lack of power. With snow swirling down untouched and impassable streets, forecasters warned that an additional 1 to 2 feet of snow was possible in some areas through early Monday morning amid wind gusts of 40 mph. Police said Sunday evening that there were two “isolated” instances of looting during the storm.

Two people died in their suburban Cheektowaga, New York, homes Friday when emergency crews could not reach them in time to treat their medical conditions. County Executive Mark Poloncarz 10 more people died in Erie County during the storm, including six in Buffalo, and warned there may be more dead.

“Some were found in cars, some were found on the street in snowbanks,” said Poloncarz. “We know there are people who have been stuck in cars for more than 2 days.”

Freezing conditions and day-old power outages had Buffalonians scrambling to get to anywhere that had heat amid what Hochul called the longest sustained blizzard conditions ever in the city. But with streets under a thick blanket of white, that wasn’t an option for people like Jeremy Manahan, who charged his phone in his parked car after almost 29 hours without electricity. “There’s one warming shelter, but that would be too far for me to get to. I can’t drive, obviously, because I’m stuck,” Manahan said. “And you can’t be outside for more than 10 minutes without getting frostbit.”

Ditjak Ilunga of Gaithersburg, Maryland, was on his way to visit relatives in Hamilton, Ontario, for Christmas with his daughters Friday when their SUV was trapped in Buffalo. Unable to get help, they spent hours with the engine running, buffeted by wind and nearly buried in snow.

By 4 a.m. on Saturday, their fuel nearly gone, Ilunga made a desperate choice to risk the howling storm to reach a nearby shelter. He carried 6-year-old Destiny on his back while 16-year-old Cindy clutched their Pomeranian puppy, following his footprints through drifts.

“If I stay in this car I’m going to die here with my kids,” Ilunga recalled thinking. He cried when the family walked through the shelter doors. “It’s something I will never forget in my life.”

The storm knocked out power in communities from Maine to Seattle. But heat and lights were steadily being restored across the U.S. According to poweroutage.us, less than 200,000 customers were without power Sunday at 3 p.m. EDT — down from a peak of 1.7 million.

Concerns about rolling blackouts across eastern states subsided Sunday after PJM Interconnection said its utilities could meet the day’s peak electricity demand. The mid-Atlantic grid operator had called for its 65 million consumers to conserve energy amid the freeze Saturday.

In North Carolina, less than 6,500 customers had no power — down from a peak of 485,000. Across New England, power has been restored to tens of thousands with just under 83,000 people, mostly in Maine, still without it. In New York, about 34,000 households were still without power Sunday, including 26,000 in Erie County, where utility crews and hundreds of National Guard troops battled high winds and struggled with getting stuck in the snow. 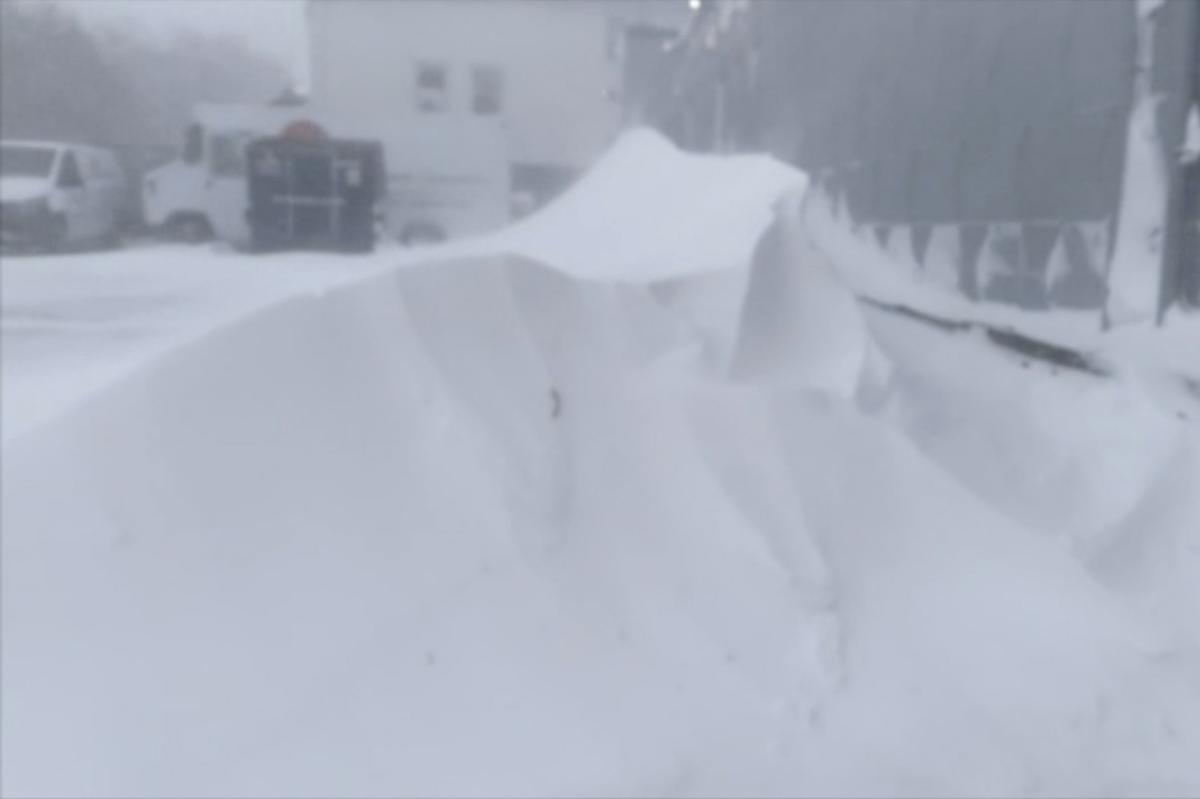 Storm-related deaths were reported in recent days all over the country: 12 in Erie County, New York, ranging in age from 26 to 93 years old, and another in Niagara County where a 27-year-old man was overcome by carbon monoxide after snow blocked his furnace; 10 in Ohio, including an electrocuted utility worker and those killed in multiple car crashes; six motorists killed in crashes in Missouri, Kansas and Kentucky; a Vermont woman struck by a falling branch; an apparently homeless man found amid Colorado’s subzero temperatures; and a woman who fell through Wisconsin river ice.

In Jackson, Mississippi, city officials on Christmas Day announced that residents must now boil their drinking water due to water lines bursting in the frigid temperatures

In Buffalo, William Kless was up at 3 a.m. Sunday. He called his three children at their mother’s house to wish them Merry Christmas and then headed off on his snowmobile for a second day spent shuttling people from stuck cars and frigid homes to a church operating as a warming shelter.

Through heavy, wind-driven snow, he brought about 15 people to the church in Buffalo on Saturday, he said, including a family of five transported one-by-one. He also got a man in need of dialysis, who had spent 17 hours stranded in his car, back home, where he could receive treatment.