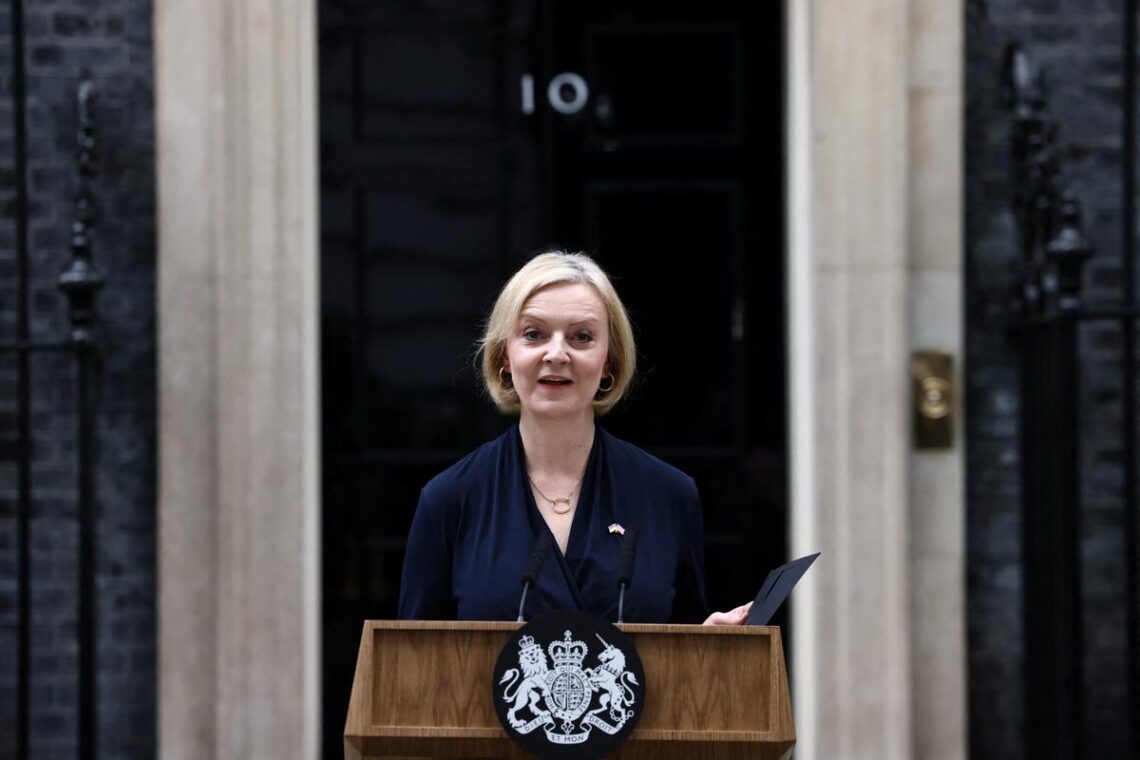 Spoke to King Charles III on intent to resign, says Tory leader; a ‘leadership election’ will be completed next week, she says; reports say that former PM Boris Johnson is planning a comeback

Spoke to King Charles III on intent to resign, says Tory leader; a ‘leadership election’ will be completed next week, she says; reports say that former PM Boris Johnson is planning a comeback

Britain is about to get its third Prime Minister in three months, with Prime Minister Liz Truss announcing that she will quit the post, under growing pressure from Conservative MPs, after her budgetary plans, at the heart of which were unfunded tax cuts, deeply rattled markets, and had led to the replacement of the Chancellor only days ago.

Speaking from behind a lectern outside No. 10 Downing Street, where only 45 days ago she had stood, having just been appointed Prime Minister of the U.K., by the late Queen Elizabeth II, Ms. Truss announced her decision to a country that has been through a summer and early autumn of political chaos and economic turmoil.

The outgoing Prime Minister said that she had come into the office at a time of significant international and economic instability, with families and businesses worried about how they would pay their bills. Ms. Truss said that she was elected by the Conservative party with a mandate to fix the “low growth” that was holding the UK back, by lowering taxes and returning to high growth.

“I recognize though, given this situation, I cannot deliver the mandate on which I was elected by the Conservative Party,” Ms. Truss said, adding that she had spoken to King Charles III and informed him of her intent to resign as leader of the party.

Ms. Truss also announced that she had met with Sir Graham Brady, who is the Chairman of the powerful 1922 Committee, on Thursday morning, and they had decided that a “leadership election” will be “completed in the next week”. The 1922 Committee is a group of backbench MPs that meets twice weekly when the House of Commons is in session and whose support is crucial for Ms. Truss.

I recognise however that, given the situation, I cannot deliver the mandate on which I was elected by the Conservative Party.

I have therefore spoken to His Majesty The King to notify him that I am resigning as Leader of the Conservative Party.

Speaking later to the press Mr. Graham was asked whether he would accept that the whole situation was a “dog’s dinner”.

“It’s certainly not a circumstance that I would wish to see,” he said.

Former Chancellor Kwasi Kwarteng was compelled to step down last Friday following a botched mini-budget that had rattled markets.

Just on Thursday, the Home Secretary, Suella Braverman had resigned, ostensibly because she had not followed security protocols while sending an email. However, in her publicly posted letter, she said that she had “concerns” about the government’s “direction”.

Also on Thursday, were chaotic scenes in the British Parliament, with reports of Tory leaders allegedly manhandling MPs in an attempt to make them support the government during a vote on fracking that had been introduced by Labour. In all of this, there was also confusion about whether the Conservative Chief Whip and Deputy Whip had resigned (it was later confirmed that they had not).

Shortly after Ms. Truss’s resignation was announced on Thursday, reports that former British Prime Minister Boris Johnson was planning a return to No. 10 began emerging. Mr. Johnson believed it was in the “national interest”, The Times reported.

It was Mr. Johnson being ousted from office in early July that had set off a contest through August that brought Ms. Truss to her leadership role after she won a majority of the some 160,000 votes from Conservative members.

Several Tory MPs tweeted their support for Mr. Johnson on Thursday afternoon, citing the fact that he was the only one (of the possible Truss replacements) who had won a general election and had a nationwide mandate.

However, Mr. Sunak had resigned from Mr. Johnson’s cabinet, unlike Ms. Truss, who had stayed on as Foreign Secretary. Mr. Sunak’s “disloyalty” to Mr. Johnson was a factor in his loss to Ms. Truss in the summer and it is a challenge he will still need to overcome in any intra-party contest.

‘We can’t have a revolving door of chaos’: Starmer

Pitching the notion that Labour would form a stable government, the party’s leader, Kier Starmer, said on Thursday that the Conservative party had done “huge damage” to the reputation of the country and that the public was dealing with higher prices and mortgages.

“So we can’t have a revolving door of chaos. We can’t have another experiment at the top of the Tory party,” he said, adding that there must be a general election so the public can “make their mind up about this chaos”.

“There are no words to describe this utter shambles adequately. It’s beyond hyperbole – and parody,” Scotland’s First Minister, Nicola Sturgeon tweeted, saying ordinary people were paying the price and that an election was a “democratic imperative”.

“The interests of the Tory party should concern no-one right now. A General Election is now a democratic imperative,” she said.