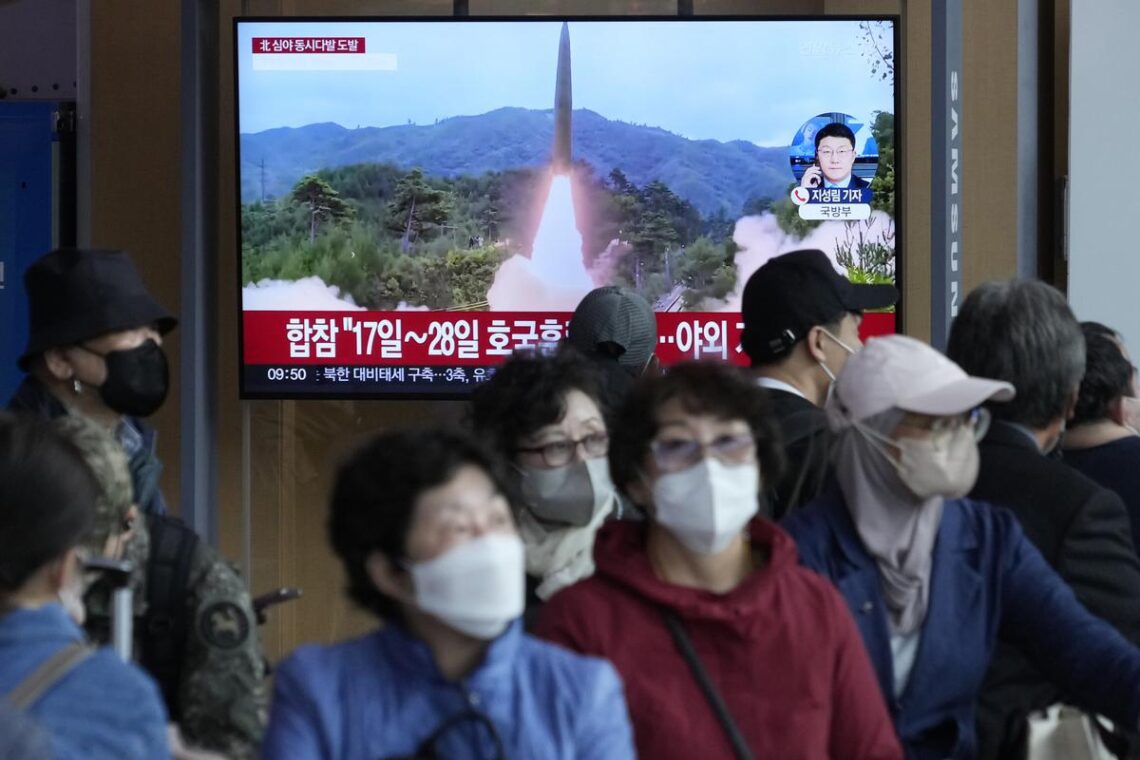 North Korea fired three short-range ballistic missiles toward the sea Wednesday that prompted South Korea to issue an air raid alert on its eastern island, escalating animosities between the rivals.

The launches came hours after North Korea issued a veiled threat to use nuclear weapons to get the U.S. and South Korea to “pay the most horrible price in history” — an escalation of its fiery rhetoric targeting the ongoing large-scale military drills between its rivals.

South Korea’s Joint Chiefs of Staff said in a statement North Korea fired the missiles from its eastern coastal area of Wonsan on Wednesday morning.

The Joint Chiefs of Staff said one of the missiles landed in the international waters 26 kilometers (16 miles) south of the Koreas’ eastern sea border and 167 kilometers (104 miles) northwest of South Korea’s Ulleung island. It said it has issued the air raid alert on the Ulleung island.

Animosities on the Korean Peninsula have been running high in recent months, with North Korea testing a string of nuclear-capable missiles and adopting a law authorizing the preemptive use of its nuclear weapons in a broad range of situations. Some experts still doubt North Korea could use nuclear weapons first in the face of U.S. and South Korean forces.

North Korea has argued its recent weapons tests were meant to issue a warning to Washington and Seoul over their series of joint military drills that it views as an invasion rehearsal, including this week’s exercises involving about 240 warplanes.

Mr. Pak also accused the Pentagon of formulating a North Korean regime collapse as a major policy objective in an apparent reference to the Pentagon’s recently released National Defense Strategy report. The report stated any nuclear attack by North Korea against the United States or its allies and partners “will result at the end of that regime.”

He slammed South Korean military leaders over what he called “rubbish” comments that threatened to destroy North Korea if it uses nuclear weapons.

South Korea’s military has warned North Korea that using its nuclear weapons would put it on a “path of self-destruction.”

“If the U.S. and South Korea attempt to use armed forces against (North Korea) without any fear, the special means of the (North’s) armed forces will carry out their strategic mission without delay,” Mr. Pak said, in an apparent reference to his country’s nuclear weapons.

“The U.S. and South Korea will have to face a terrible case and pay the most horrible price in history,” he said.

U.S. and South Korean officials have steadfastly said their drills are defensive in nature and that they have no intentions of attacking North Korea.

The White House on Tuesday pushed back against North Korea’s saber-rattling, reiterating that drills are part of a routine training schedule with South Korea.

“We reject the notion that they serve as any sort of provocation. We have made clear that we have no hostile intent towards (North Korea) and call on them to engage in serious and sustained diplomacy,” White House National Security Council spokesperson Adrienne Watson said.

North Korea “continues to not respond. At the same time, we will continue to work closely with our allies and partners to limit the North’s ability to advance its unlawful weapons programs and threaten regional stability,” Ms. Watson said.