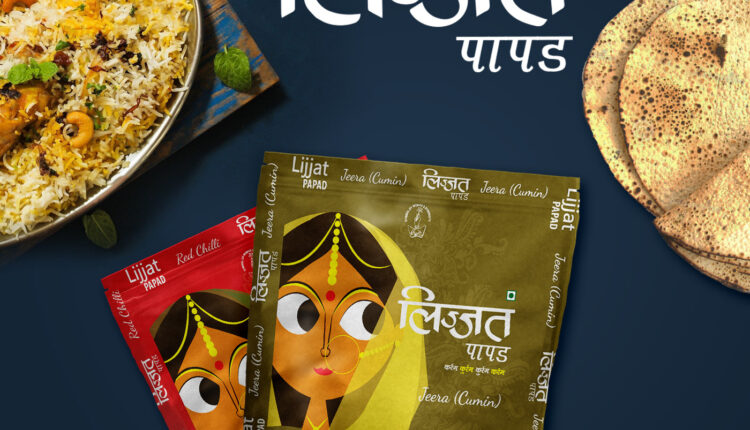 We have always loved to either watch or read the story of someone who breaks the financial shackles and barges into the success on own, making others go gaga over his/her achievement, in films, books, etc.

What it takes to make that ‘Rags to Riches’ story turn into reality, do you know? It is their determination which helps them strive for things not in their reach at incipient stages.

In semblance to this, we have come up with a similar success story that the world should have known a long ago.

This real-life story revolves around seven Gujrati homemakers who had started papad business under the name of Lijjat papad. They say that the business was kicked off with a meagre loan of Rs.80 in the days dating back to the summer of 1959. The notion of setting up a papad business came to their minds when they were idling away time together on a terrace.

In the early days of the startup, they would roll papads on the terrace and come downstairs with 4 packets completed every day. These women carrying fervent hopes were only half-literate, due to which they were left homebound ever since they were married off in their tender age. This papad making was the sole expertise they could avail of back then owing to the dearth of opportunities with them.

They find themselves indebted to Purushottam Damodar Dattani to this day because he had mentioned them through the hardships they underwent, especially when there was no other person to render support to them in the cause. He would collect the packets of papad and go to post to pillars throughout the day to find out the right seller, and then eventually handed out to a local store run by Anandji Premji & company in Giragaon, Chowpatti.

This is how the quest for establishing Lijjat Papad set its foot in the market after Dattani Ji successfully persuaded his father to entrust the seven Bens in the making.

Of the seven Bens, JaswantiBen recalls that the first day they could earn only eight annas for one kilogram. She goes on to add that the second day in the business saw an uptick in the earning like they made Re 1 for two kilos. In the following days, the business improved beyond imagination when women of the locality came on board with our seven Bens, hearing the word of mouth from the consumers. In a matter of 3-4 months, the strength of the team grew to 200 and a new branch of Lijjat Papad was opened in Wadala.

Consequently, the annual sales of papads touched the mark of Rs 6000, that too in 1959 when such amount was considered to be huge. 62 years into the business now, the Lijjat Papad that began with just seven women has shaped into the all-women cooperative with almost 45000 women working under the same roof.

Every woman would stir out of their house, go to the workplace, some kneaded dough and others rolled the dough into paper and lay them on the terrace to dry. The dried-up papads were later handed to the quality testing people once packaged. The quality team always stayed very peculiar about the product, they did not let women go off when the quality failed to match up with the requirements, rather discussed with them the ways to surmount the poor quality of the product.

Their idea of the quality of papad was deeply rooted in the Indian ethos. People involved in rolling papad ensured that they had a clean house and space, whereas others who lacked these facilities were put in kneading dough, packaging and testing.

To keep the business going, the seven sisters borrowed money from Chaganlal Karamsi Parekh, who later went on to become their another mentor. He asked the working women to brush aside the apprehension of marketing the products, instead exhorted them to be more emphatic on the quality. Gaining appreciation among the populace, many women arrived at joining the hands in making papads. This came as a turning point for the Lijjat Papad. For it to remain all women pervasive workplace, the founding people marched ahead to register it by the name of  ‘Mahila Griha Udyog Lijjat Papad’. The best about the cooperative is any woman, without any relevant skill, can make into the team, provided she has the zeal to thrive under the demanding conditions along with other women in the group.

The cardinal principle they adhere to till today is the quality of ingredients they use in making of papads. The reason for what they have never compromised upon is the cause of the success of the business since the day it came into being. Ingredients like Urad dal, Hing, black pepper, to name a few have been imported from across the length and breadth of India, and sometimes the import even transcended the border to Myanmar over the years.

Who knew of something called “Work From Home” unless it became the new normal during the present pandemic of COVID-19. But our seven Bens had taken to WFH norm long back when women were forbidden to even step out for anything.

Don’t you see it as a precedent of women empowerment? Women empowerment in the sense that they had trespassed the very unconventional path of emanating from their household boundaries and ingressed into the far reaches of the interoperability. Many people also at that time in their proximity must have tried hard to shake their determination but could have not done, all because the seven Bens were too high on their ambition to be bogged down by anything.

SANJYOT KEER, From a Passionate Cook to a Celebrity Chef of India

SANJYOT KEER, From a Passionate Cook to a Celebrity Chef of…