Ukrainian President Zelenskyy speaks to PM Modi about G20, thanks India for aid and UN support 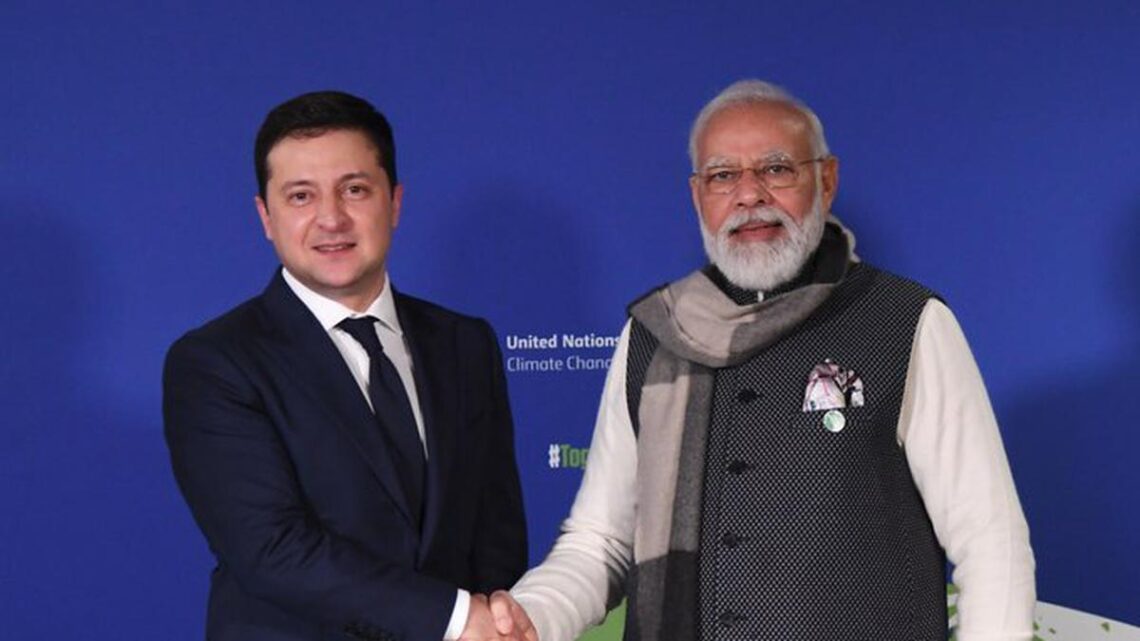 Prime Minister Narendra Modi spoke to Ukrainian President Volodymyr Zelenskyy on Monday, to discuss India’s ongoing G-20 Presidency, and asked for support for his “10-point Peace Plan”. The call marked the fourth telephone conversation between the two leaders this year and came days after Mr. Zelenskyy’s visit to Washington, his first trip abroad since the war in Ukraine began in February. Apart from discussing the G20, Mr. Zelenskyy thanked India for its help during the war. Mr. Modi also asked the Ukrainian president for helping “facilitate arrangements for the continued education of Indian students,” among about 22,500 Indians who had to return from Ukraine earlier this year..

“I had a phone call with PM Narendra Modi and wished [India] a successful G20 presidency. It was on this platform that I announced the peace formula and now I count on India’s participation in its implementation. I also thanked for humanitarian aid and support in the UN,” Mr. Zelenskyy said in a tweet.

I had a phone call with @PMOIndia Narendra Modi and wished a successful #G20 presidency. It was on this platform that I announced the peace formula and now I count on India’s participation in its implementation. I also thanked for humanitarian aid and support in the UN.

Mr. Zelenskyy’s reference to the peace formula entails a plan he had discussed during an address to the Bali G20, where he had listed 10-steps to peace: Including ensuring “radiation and nuclear safety; food security; energy security; release of all prisoners and deported persons; implementation of the UN Charter and restoration of Ukraine’s territorial integrity and the world order; withdrawal of Russian troops and cessation of hostilities; restoration of justice; countering ecocide (economic suppression); preventing escalation; and finally – confirmation of the end of the war. “

In a statement, the government said that PM Modi had “strongly reiterated his call for an immediate cessation of hostilities, and said that both sides should revert to dialogue and diplomacy to find a lasting solution to their differences.” while also offering India’s support for any peace efforts.

The Modi-Zelenskyy conversation is significant as India’s G20 Presidency has already begun with a number of meetings to finalise the agenda for the summit expected in September 2023. The MEA did not comment on whether PM Modi invited President Zelenskyy to the summit, as his predecessor, Indonesian President Joko Widodo had. Russian President Vladimir Putin is invited to attend both the G20 and the SCO summits in India this year.

While India’s position at the United Nations has been to abstain on all resolutions critical of Russia’s actions, the government has repeatedly called for “dialogue and diplomacy” to end the conflict in which thousands have died and eight million people have fled the violence.

In August, India’s Ambassador to the U.N. Ruchira Khamboj said that India had dispatched 11 consignments of approximately 97.5 tonnes of humanitarian aid to Ukraine and neighbouring countries like Romania, Moldova, Slovakia, and Poland.

“This humanitarian aid and assistance symbolizes the human centric development approach of the Government of India, a central tenet of our national beliefs and values, which perceives the whole world as one family,” Ms. Khamboj said.

The phone call also followed an outburst by Ukrainian Foreign Minister Dmytro Kuleba who criticised India for “benefiting from Ukrainian suffering” as it continued to ramp up imports of Russian oil.

“We are waiting for the moment when Indian foreign policy will call spade a spade, and name the conflict – not ‘war in Ukraine’, but what it is, a ‘Russian aggression against Ukraine’,” Mr. Kuleba had told television channel NDTV earlier this month.

In a television interview on Sunday, Mr. Putin blamed the Ukrainian leadership for refusing to come to the table for talks, but did not offer a ceasefire or explain what the “acceptable solutions” he was offering would be.