Epidemic control workers wear PPE as they walk in the street by a closed shop near a community with residents under health monitoring for COVID-19 on December 4, 2022 in Beijing, China.
| Photo Credit: Getty Images

China is easing some of the world’s most stringent anti-virus controls and authorities say new variants are weaker. But they have yet to say when they might end a “zero-Covid” strategy that confines millions of people to their homes and set off protests and demands for President Xi Jinping to resign.

On December 5, commuters in Beijing and at least 16 other cities were allowed to board buses and subways without a virus test in the previous 48 hours for the first time in months. Industrial centres, including Guangzhou near Hong Kong, have reopened markets and businesses and lifted most curbs on movement while keeping restrictions on neighbourhoods with infections.

The government announced plans last week to vaccinate millions of people in their 70s and 80s, a condition for ending “zero-Covid” restrictions that keep most visitors out of China and have disrupted manufacturing and global trade.

That spurred hopes for a quick end to “zero-Covid.” But health experts and economists warn it will be mid-2023 and possibly 2024 before vaccination rates are high enough and hospitals are prepared to handle a possible rash of infections. Security guards wear PPE as they guard outside a community in an area with residents under health monitoring or lockdown for COVID-19 on December 4, 2022 in Beijing, China.
| Photo Credit:
Getty Images

“China is not ready for a fast reopening yet,” Morgan Stanley economists said in a report December 5. “We expect lingering containment measures. … Restrictions could still tighten dynamically in lower-tier cities should hospitalizations surge.”

The changes follow protests demanding an end to “zero-Covid” but are in line with Communist Party promises earlier to reduce disruption by easing quarantine and other restrictions. The changes have been highly publicised in a possible effort to mollify public anger, but there is no indication whether any might have been made in response to protests in Shanghai and other cities.

China is the only major country still trying to stamp out transmission while the United States and others relax restrictions and try to live with the virus that has killed at least 6.6 million people and infected almost 650 million.

The protests began Nov. 25 after at least 10 people died in a fire in an apartment building in Urumqi in the northwest. Authorities denied suggestions firefighters or victims were blocked by locked doors or other anti-virus controls. But the disaster became a focus for public frustration.

Ahead of the protests, the Communist Party promised to make “zero-Covid” less costly and disruptive but said it was sticking to the overall containment strategy. 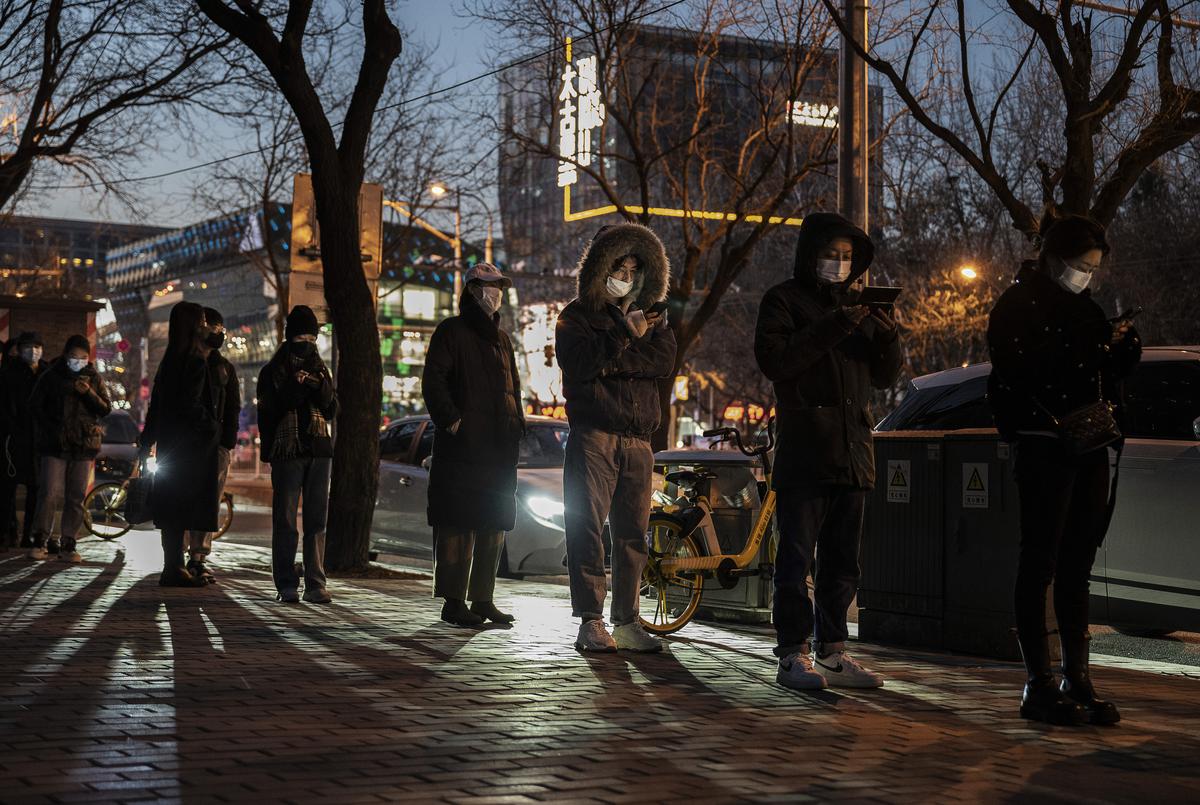 People line up in the cold for nucleic acid tests to detect COVID-19 at a public testing site on December 4, 2022 in Beijing, China.
| Photo Credit:
Getty Images

The party earlier announced updates to the strategy to make it more focused. Authorities began suspending access to buildings or neighbourhoods with an infection instead of whole cities. But a spike in cases starting in October prompted areas across China to close schools and confine families to cramped apartments for weeks at a time.

Authorities say they are “further optimising” controls and warn the country needs to stay alert.

China faces “new situations and tasks” due to the “weakening of the pathogenicity” of the latest omicron variant, a Deputy Premier in charge of the anti-virus campaign, Sun Chunlan, said last week. She said China has “effective diagnosis and treatment” and has vaccinated more than 90% of its people.

The ruling party is trying to balance “epidemic prevention, economic stability and security for development,” Ms. Sun said on December 30 in a conference with health officials, according to the official Xinhua News Agency.

Despite the changes, Beijing and other cities are telling some residents to stay home or enforcing other restrictions on neighbourhoods with infections. An epidemic control workers wearing PPE is given a nucleic acid test to detect COVID-19 as others line up behind her at a public testing site on December 4, 2022 in Beijing, China.
| Photo Credit:
Getty Images

Travellers at the Chinese capital’s train stations and three airports are required to show a negative virus test within the previous 48 hours. Elsewhere, Guangzhou and other cities said areas deemed at high-risk for infection still face additional curbs.

A negative virus test within the past 72 hours still is required to enter public buildings in vast metropolis of Chongqing in the southwest, a hotspot in the latest infection spike. Dining in restaurants in some parts of Beijing still is prohibited.

A newspaper reported last week that some Beijing residents who have mild or asymptomatic COVID-19 cases would be allowed for the first time to isolate themselves at home instead of going to one of China’s sprawling quarantine centres. The government has yet to confirm that.

Forecasters say the struggling economy, already under pressure from weak demand for Chinese exports and a government crackdown on debt in the real estate industry, might be contracting this quarter. Epidemic control workers wear PPE as they line up wth others in the cold for nucleic acid tests to detect COVID-19 at a public testing site on December 4, 2022 in Beijing, China.
| Photo Credit:
Getty Images

Regulators have responded by freeing up more money for lending and are trying to encourage private investment in infrastructure projects. They have eased some financial controls on real estate developers to reverse a slump in one of China’s biggest industries.

“Policymakers are focusing their efforts on spurring growth,” Eurasia Group analysts said in a report. “However, even if China’s transition away from a strict ‘zero-Covid’ policy is more decisive and accelerated, meeting public health milestones like increasing elderly vaccination will take months.”

On Dec. 5, the government reported 30,014 new cases, including 25,696 without symptoms. That was down from last week’s daily peak above 40,000 but still close to record daily highs for China.

Mr. Xi’s government has held up “zero-Covid” as proof of the superiority of China’s system compared with the United States and Western countries. China’s official death toll stands at 5,235 since the start of the pandemic versus a U.S. count of 1.1 million.

China also has suffered a possible rise in fatalities among people with cancer, heart disease and other conditions who struggled to get care while hospitals focused on treating virus cases. Data on those deaths haven’t been reported.