We’ve already looked at the most liked posts on Instagram, but which accounts have the most Instagram followers?

by Faraz Ahmad Khan
in offbeat, Entertainment
Reading Time: 20 mins read
A A 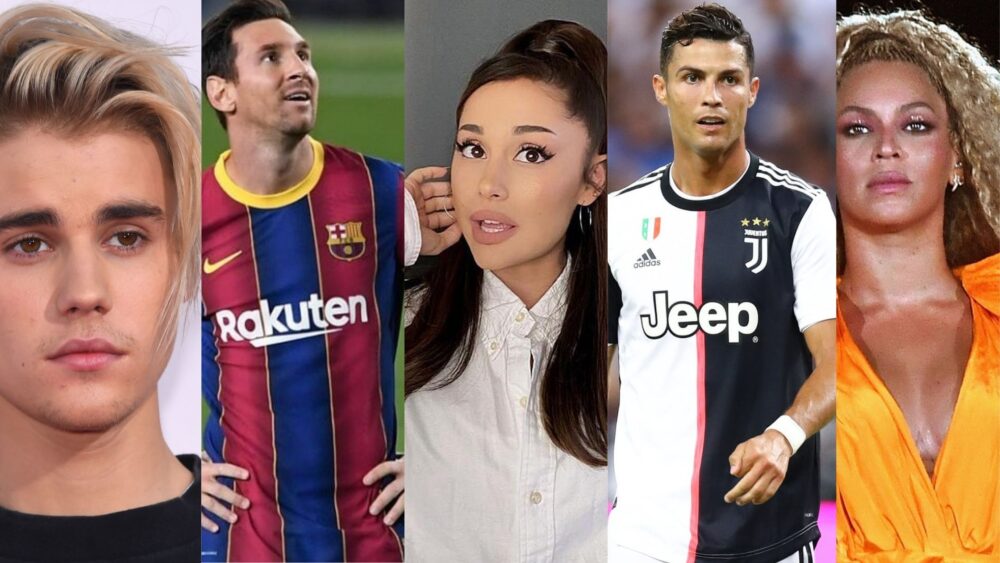 With around 1 billion monthly active users, Instagram is a massive platform and hugely popular all over the world. With the rise of influencers, people can even make a living there or at least get some free stuff.

We’ve already looked at the most liked posts on Instagram, but which accounts have the most Instagram followers?

Read further or watch the video to discover the top 10 accounts, ranging from soccer players to musicians to brands.

Here’s the Biebs. Being one of the biggest pop stars on the planet, it’s no surprise he made the list.

His account is a bit goofier than your average pop stars, including photos of him hanging out with celebrity mates, cartoon versions of himself, and, of course, his April Fools pregnancy prank.

Next, we have Queen Bey herself.

Along with ranking high on the list, her pregnancy announcement was once the most liked posts on Instagram.

Her account itself is pretty straightforward, most including shots from her performances and professional work, with a few more personal posts among them.

Next up we have soccer player Lionel Messi, the captain of Barcelona FC and the Argentinian national football team.

One of the world’s most famous players, his Instagram is what you’d expect: shots of him playing, a look at his own personal life, and an insight into other events he attends.

The second-to-last Kardashian or Jenner on the list and, arguably, the most famous.

Her account is, arguably, pretty similar to those of her family members. Lots of pictures from her modelling and the events she attends, along with personal stuff like old family photos.

Her account is the usual pop star fare of selfies, herself at events, pictures of her friends, but it also includes a few political posts around subjects like women’s rights.

Despite not breaking into the top five, Kylie Kenner is arguably the biggest star on Instagram. She once held the top spot for a most-liked Instagram post, while she has numerous entries in the top 20 as we speak.

Her account itself focuses on her work and personal life, with lots of baby pics and photos with her partner.

Our one and only wrestler in the top 20 is Dwayne ‘The Rock’ Johnson. Star of the WWE and now world-famous actor, he takes the 4th spot.

Not many surprises on his account – there are lots of shots from filming, pictures of him in the gym, and posts about his family.

Our last musician on the list is global superstar Ariana Grande.

One of the most famous and popular singers on the planet, it’s natural she’d be so popular on Instagram and she’s the most followed woman on Instagram, to boot.

Her feed is full of pictures of her performing, meeting other celebrities, and your general depictions of living the pop high life.

We now reach our most followed human on Instagram: the soccer great, Cristiano Ronaldo. Forward for Juventus and the captain for the national Portuguese team, he’s one of the best footballers the world has known.

When it comes to his feed, there are few surprises. There are lots of family pictures, shots of him playing football, and plenty of images of him generally experiencing the good things in life.

Finally, way out in front with 300m followers, is Instagram’s official account.

Their feed has a clear purpose – to show off the best and the most interesting people and trends on Instagram. Along with that, they also promote their own IGTV content that they go out and create themselves.

Well, if an egg can beat Kylie Jenner, anything is possible.

So, what else do you think we should cover in our next video? Leave a comment below.