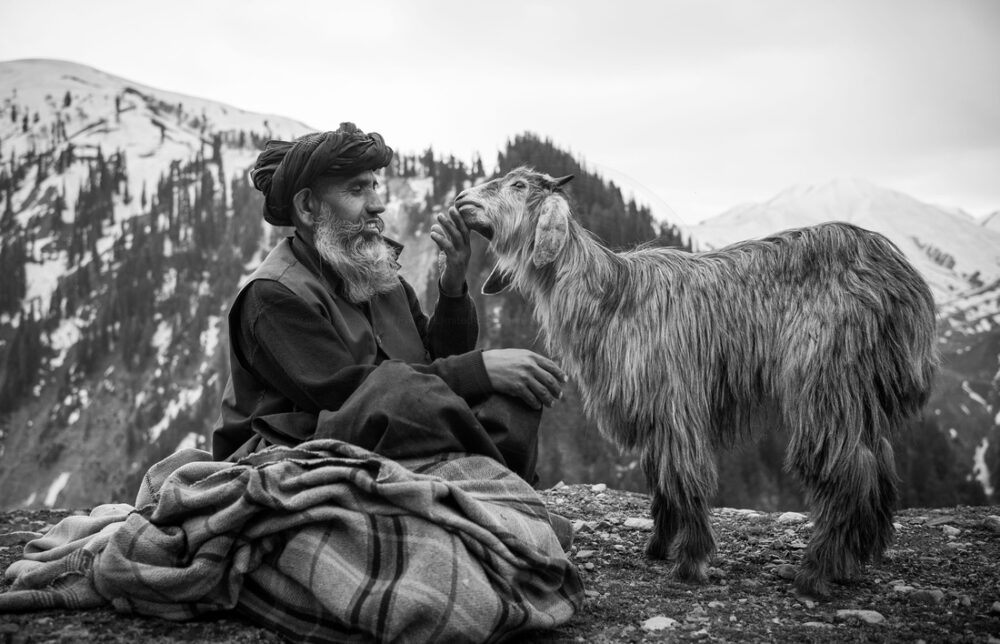 For centuries Bakarwal community has moved between summer meadows in the Himalayas and winter grazing grounds in the Jammu foothill plains. The Kashmiri nomad community contributes 11.9 % to the region’s total population. Approximately 1.5 million nomads fear for their existence in today’s India.

On the 14th of November, when the whole nation was busy lighting diyas for Diwali, Bakarwal homes were being demolished. Bakarwals have already migrated to warmer Jammu pastures to escape the harsh winter of the valley. They left behind semi-permanent structures in Kashmir’s Pahalgam as they have always done for centuries.

These ‘Kaccha’ houses serve as summer homes for six months when the nomads travel to Kashmir with their livestock.

When cold winter winds become warmer in the valley, Bakarwals and Gujjars will return to find their homes razed to the ground. J&K Administration felt the need to take away a few square feet of impermanent shelter land from the already landless and poor nomadic community.

District Commissioner of Anantnag, K.K Sidha said:
“It is not demolition of Gujjar Kothas but actually anti-encroachment drives. Till now we have retrieved 700 kannals of land that was encroached and we are submitting a report to the High Court also.”

Commissioner Sidha subtly classified nomadic settlements illegal as he backed his actions with weak logic and incorrect facts. “Divisional bench is monitoring the development authority and they have given direction to remove all the unauthorized structures on forest land,” Sidha further added.

J&K Forest department had served eviction notices to the tribals in Jammu and Kashmir after the scrapping of the Roshni Act. Despite being protected by the 2006 Forest Right Act against forced displacements, thousands of Gujjar and Bakarwal families now face an existential crisis because the government chose to ignore its promises.

The Forest department has been systematically demolishing decade-old settlements of Gujjars and Bakarwals for some time now and quietly dubbing it as a drive to root out illegal occupants on government lands. On the 18th of July, similar incidents happened in Jammu which prompted JKGBYWC to protest all across J&K to shed light on the injustice.

Locals and forest officials are enclosing in on areas that have previously been nomadic routes and sanctuaries, their traditional paths, pastures, and water supplies are now being regularly blocked. The tensions have led to scuffles and harassment of nomadic girls.

A young man was allegedly killed in 2016 by police when the nomads resisted forceful relocation near Jammu. In January, an 8-year-old girl Bakarwal girl was abducted and repeatedly raped by several locals of a town named Kathua. She was allegedly kept in a local temple for several days until the culprits finally killed her and dumped her out in the woods. Her body was mutilated and this horrific act triggered a nationwide protest.

Investigation revealed that the act was perpetrated out of hatred for the nomadic tribes and their religion. This gruesome deed highlights the mentality of local fanatics under the influence of a certain political ideology, the lengths they were willing to go to scare Bakarwals out of the area.

Associates of the ruling party even marched in the support of the culprits to reinforce the hatred and justify the rape, mutilation, and murder of the innocent girl who was simply grazing her family’s ponies near the town. Muslim nomads fear the continued propaganda and communal disharmony propagated by the BJP led government might lead to further violence brutal evictions and attacks for alleged cattle theft.

The J&K government dissolved the 2001 Roshni ACT that allowed the transfer of ownership of state land to its occupants for a fee defined by the government
Despite the malpractice, thousands of poor nomadic families did benefit from it.
The National Conference-led government established the Roshni Act in 2001, it concluded that 1,04,458 hectares, of state land, worth around Rs 25,448 crore, was under unlawful ownership.

The law was revised under successive state governments, bringing more accusations that the changes are for the convenience of influential individuals.
Originally the petition against the Roshni Act was for the retrieval of state land invaded upon by bureaucrats, politicians, and police officers.

It did not target worthy beneficiaries until a law student, Ankur Sharma from Kathua approached the court out of demographic invasion fear in the Hindu majority Jammu. Litigation filed by Ankur against the Roshni Act that aimed to nullify the land transfers under the act.

Ankur raised fingers at the land allotment process accusing the authorities of favoring Muslim candidates while actual figures put approximately 2,212 hectares being allotted to non-muslim applicants out of the total 2,272 hectares in Jammu. The court decision is further being misinterpreted to widen the community gap and the situation is becoming harder for the nomadic tribes of J&K.

Bakarwals and Gujjars have always faced hostility and reservation from settled Kashmiri Muslims too. People from major cities of Kashmir such as Srinagar and Anantnag look down upon nomads because of their lack of education, financial insecurity, and tribal culture.

Bakarwals and other tribals rarely participate in the ongoing political debate of Kashmir’s Independence. Landless and financially weakened nomads only care about making two ends meet. This lack of participation and occasionally forced collaboration with Indian armed forces are severely resented by economically sound Kashmiri Muslims.

A local of Anantnag, when asked about their stance on the nomads said, “ They are considered dishonourable mostly. Marriages are forbidden with Gujjars and others, they are loyal to people who harm Kashmiris and can only be trusted when there is money for them.”

Much like the prejudiced caste system prevalent in the rest of the country, these nomads face discriminatory actions from Kashmiri Muslims. Bitter resentment and vile stereotypes are deeply embedded in the mind of most Kashmiri Muslims and this unfair thinking is not expected to change anytime soon.

Life of Bakarwals and Gujjars is undoubtedly changing. This might not be the change these 1000-year-old tribes desire but it is being forced upon them nonetheless. Caught between communities that either hates them for their religion or resents them for their lack of participation, Nomads of J&K have grave danger imminent upon them.

10 Best Work From Home Jobs To Earn Money This Pandemic