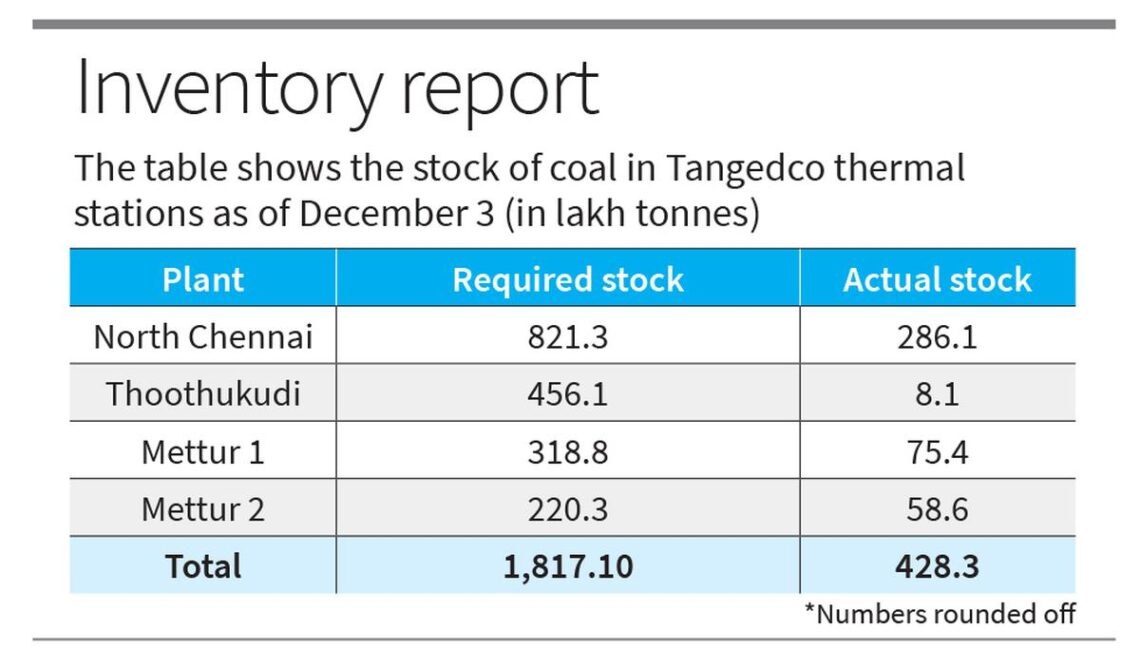 
The Southern Regional Power Committee has told its constituents to prepare an action plan for ensuring adequate coal stock. Central and State power generating stations have been asked to ensure adequate coal availability for the upcoming summer in 2023, during which Tamil Nadu’s peak power demand is expected to be 17,708 MW.

Tangedco has already urged NTPC to ensure adequate coal supply at its plants for the ensuing summer to avoid any crisis. The annual requirement of coal for Tangedco’s existing thermal power stations with a total capacity of 4,320 MW at 100% load factor is 26.28 million tonnes per annum.

As per data from the Central Electricity Authority (CEA), Tangedco’s own thermal power generating stations had an actual stock of 428.3 thousand tonnes of the normative level of 1817.1 thousand tonnes, as of December 2. Among the thermal stations, the North Chennai Thermal Power Station, with an installed capacity of 1,830 MW, had 31% of the actual stock as against the normative level. The Thoothukudi power plant, which has a capacity of 1,050 MW, had a stock of 2% when compared to the normative requirement. The Mettur Power Station I had an actual stock of 24% as against the normative requirement, while Station II had 25%. Together their installed capacity is 1,440 MW.

The State’s current peak demand is also lower – around 14,000 MW. If the coal stock is less than 25% of the normative level, it is considered critical. The CEA said the Mettur I and Thoothukudi plants were to increase the lifting of stocks through rail-to-road mode.

As per CEA data, coal stocks at non-pithead thermal power plants across India, which are located at a distance from coal mines, were 23,731 thousand tonnes, which is 46% of the normative level of 51,873 thousand tonnes. The Union Ministry of Coal recently said India’s coal production increased by 17.13% to 524.20 million tonnes (MT) during April-November 2022 from 447.54 MT during the same period of the previous year. The total coal despatch increased by 7.45% to 557.95 MT during April-November 2022 from 519.26 MT in the same period last year.