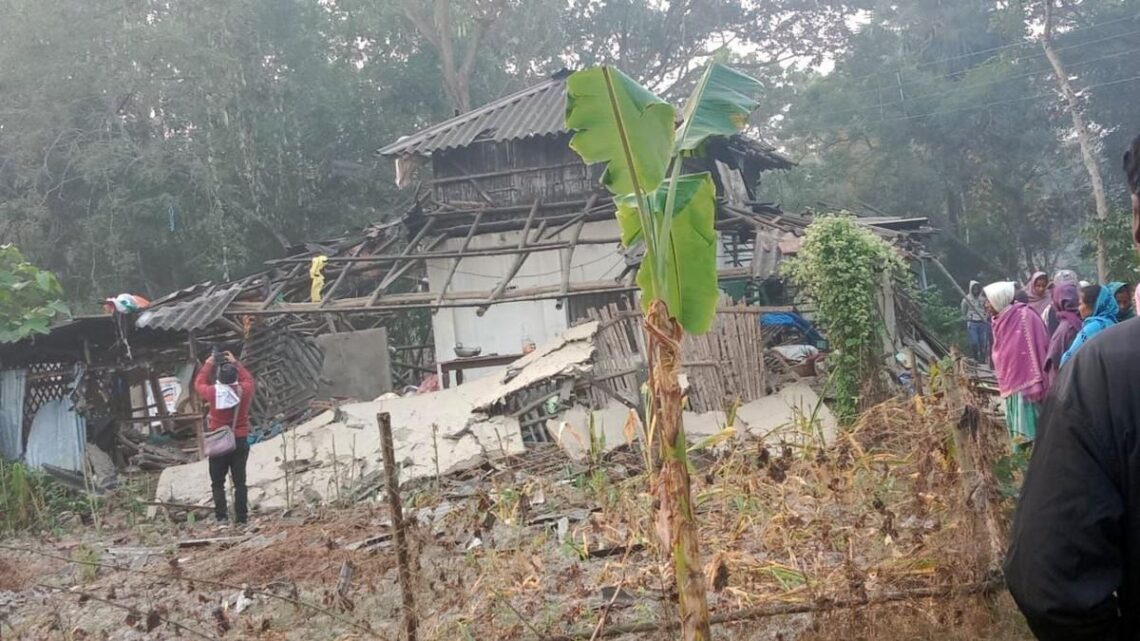 
Investigations are on to ascertain the reasons behind the Dec. 2 blast inside the house of Trinamool Congress (TMC) supporter at Bhupatinagar area, Purba Medinipur district in West Bengal. Photo: Special Arrangement

Three people were killed and two others were injured in a blast inside the house of Trinamool Congress (TMC) supporter at Bhupatinagar area, a few kilometres away from the venue where party leader Abhishek Banerjee had addressed a rally, in West Bengal’s Purba Medinipur district on December 2.

The blast occurred in the house of Trinamool Congress leader Rajkumar Manna and large portions of the house were destroyed in the blast. Parts of the roof of the thatched house were blown off in the explosion. The blast occurred in the late hours of December 2 and two others have sustained injuries in the blast. Locals said that they heard a loud sound from the house in the evening. Father of one of the deceased in the explosion, Biswajit Gayen, said that his son had gone to the house of Rajkumar Manna on Dec. 2.

While investigations are on to ascertain the reasons behind the blast, political parties are targetting each other for the incident.

Trinamool Congress spokesperson Kumal Ghosh blamed the Bharatiya Janata Party (BJP) for the incident and said that over the past few days BJP supporters were targeting Trinamool supporters.

“There is an elaborate ploy in this explosion to demand an NIA probe and target Trinamool workers before the panchayat elections,” Mr. Ghosh said.

Meanwhile, the explosion has occurred ahead of two high-voltage political rallies in the State. While Trinamool general secretary Abhishek Banerjee addressed a rally at Contai in Purba Medinipur district not far from the residence of BJP leader Suvendu Adhikari, the BJP organised a rally at Daimond Harbour, the constituency of Mr. Abhishek Banerjee. Mr. Adhikari was the key speaker at the BJP’s event in Diamond Harbour which was held at the intervention of the Calcutta High Court.

Over the past few weeks, several incidents of crude bomb explosion have occurred in the State and even children have sustained injuries or died in the blast. Opposition parties has said that crude bombs are being manufactured and stored ahead of panchayat polls in the State.

20 Most Powerful Dialogues From Elite