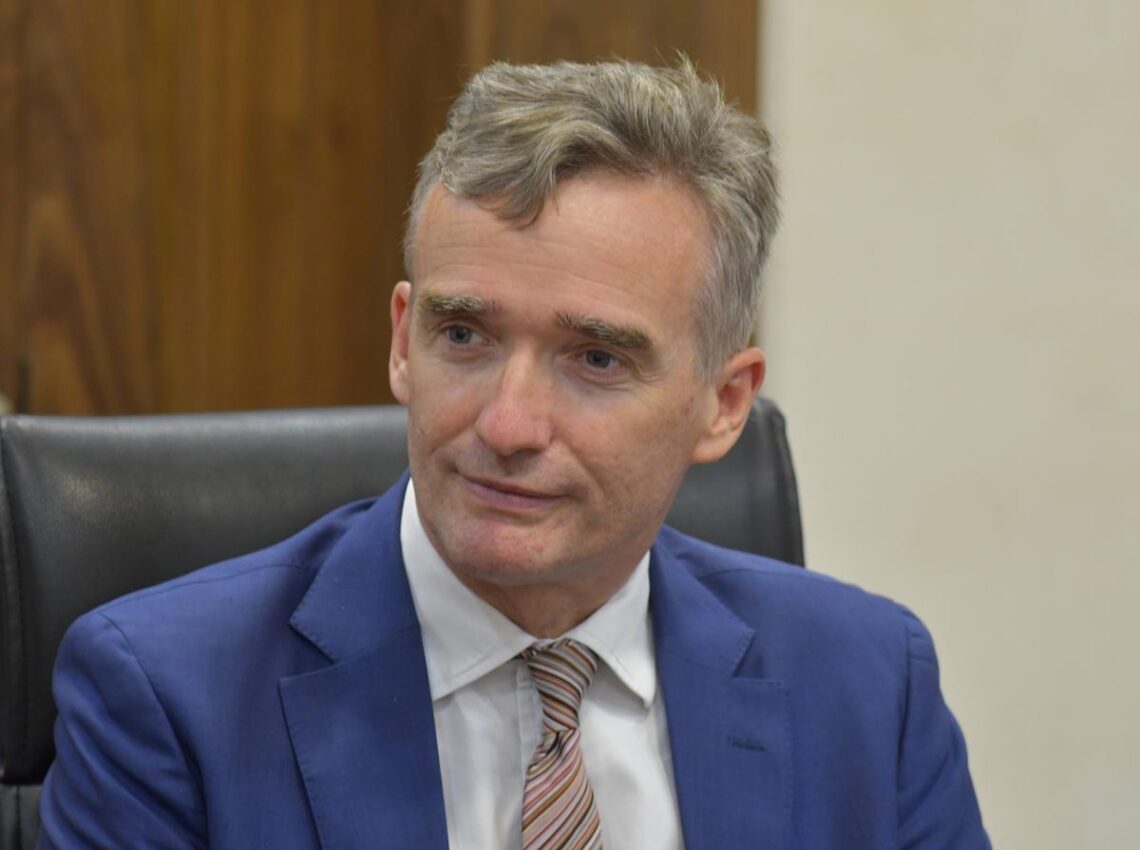 India will be absolutely central to ensuring a safe and open Indo-Pacific, says Mr. Ellis

India will be absolutely central to ensuring a safe and open Indo-Pacific, says Mr. Ellis

Making a strong pitch for joint collaboration, Alex Ellis, the U.K. High Commissioner in India, said what engine maker Rolls- Royce is ready to do and the British government ready to support is the indigenisation of design and manufacture of Indian jet engines something which “I don’t think any other partner in the world has offered up to now”.

The strong pitch comes as India considers offers from the world’s top engine manufacturers to jointly develop an aero-engine for its future indigenous fighter jets. At the Expo, India and U.K. announced a new defence industry joint working group to strengthen defence collaboration which also held its first meeting.

“What the U.K. brings is high levels of expertise and technology in everything from missiles to engines. What India can bring is huge scale, and of course a significant market. And all has to be done through the prism of Make in India and Make for the World. So, what I’d also like to see is not only British companies tying up with Indian companies but also looking at how they can export,” Mr. Ellis said in a brief conversation with The Hindu at DefExpo. “We’ve seen that on the civil side, I’ll give you one example, JCB now exports from India to over 100 countries around the world. And I think we need to accelerate that work on the defence side.”

Elaborating, he said the governments of India, U.K. have already done scoping of what the future programme might look like and now the next step is for the Indian government to decide what it wants to do in terms of building a more powerful engine. The High Commissioner said that Rolls Royce has capability both in civil and military aviation.

Earlier, U.K. had offered India collaboration in development of aircraft carrier and six generation fighter technologies. Development of a fighter engine is among the top priorities for India, for which it is considering three global engine makers — General Electric of the U.S., Rolls Royce of U.K. and Safran of France — for joint collaboration.

To a question on how the U.K. can support India as its diversifies its military arsenal with emphasis on indigenisation, Mr. Ellis said, “We have seen the kind of disastrous consequences of Russia’s completely unwarranted invasion of Ukraine. And we’ve also seen the effectiveness of Ukrainian response with support from the U.K. and other countries. And that’s what we’re going to see over the next few years, the growth of trust and partnerships between countries like U.K. and India…”

Pointing out that Prime Minister Narendra Modi and former U.K. Prime Minister Boris Johnson met last year and again this year, he said there is a comprehensive strategic partnership because “we want to have a much deeper and more structured relationship”. “And the future, frankly, is a tougher one, both in the Indo-Pacific and also in the European theatre and we can actually gain strength from being together,” Mr. Ellis said.

On the Indo-Pacific where the U.K. has been very active and the high tempo of military military engagements, the High Commissioner said that Indo-Pacific is not just about defence and security, but “a whole host of things”, including research, students, commercial collaborations, and one element of it is defence and security. “India will be absolutely central to ensuring a safe and open Indo-Pacific and that is a strong U.K. interest and of course a strong Indian interest as well,” he stressed.

We had the biggest deployment of U.K. Navy since the end of the Cold War this time last year into the Indo-Pacific including to Mumbai, Mr. Ellis noted and also referred to the tri-service exercise with India. “I would expect us to see an increasing tempo of military to military cooperation, particularly with an eye on the Indian Ocean and want to create a shared understanding and ability to act together in that sphere,” Mr. Ellis added.

There has been a sharp increase in India’s military engagements in the Indian Ocean Region and the Indo-Pacific, including a series of bilateral and multilateral war games. For instance, the Malabar naval exercise comprising of India, Australia, Japan and U.S. is scheduled to be hosted by Japan in the second week of November, while the India-U.S. bilateral Army ‘exercise Yudh Abhyas’ is set to he held in Uttarakhand early November.