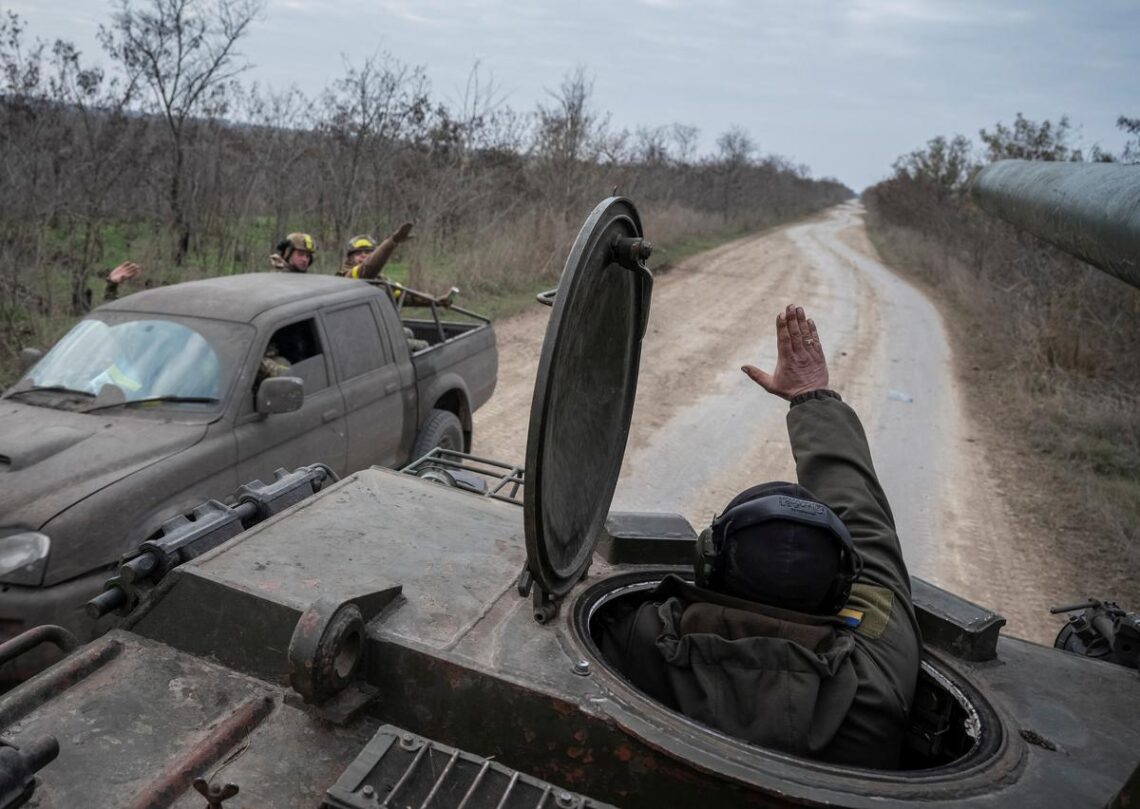 Moscow ordered its troops on Wednesday to withdraw from the entire Russian-held pocket on the west bank of the Dnipro River, including Kherson city

Moscow ordered its troops on Wednesday to withdraw from the entire Russian-held pocket on the west bank of the Dnipro River, including Kherson city

Ukrainian troops advanced in the south on November 10 after Moscow ordered one of the war’s biggest retreats, though Kyiv remained publicly wary, warning that fleeing Russians could turn Kherson into a “city of death”.

Ukraine’s army chief Valeriy Zaluzhnyi said Kyiv could not yet confirm whether Russia was indeed pulling out, but that Ukrainian troops had advanced 7 km (4 miles) in the past 24 hours and recaptured 12 settlements.

“We continue to conduct the offensive operation in line with our plan,” he wrote in a post on Telegram.

A small group of Ukrainian soldiers was shown on Ukraine’s state TV in the centre of the village of Snihurivka around 55 km north of Kherson city. They were greeted by dozens of residents in a square, with a Ukrainian flag fluttering from a pole behind them. Reuters verified the location of the video.

“Today, on Nov. 10, 2022, Snihurivka was liberated by the forces of the 131st Separate Intelligence Battalion. Glory to Ukraine!” a commander declared as the locals applauded, cheered and filmed the soldiers on their phones.

Petro Lupan, a Ukrainian volunteer distributing bread to residents along a nearby stretch of the front line north of Kherson, told Reuters he had just learned of the recapture of Snihurivka from a friend reached by phone there.

“I can’t find words to describe my feelings,” the 46-year-old said.

Moscow ordered its troops on Wednesday to withdraw from the entire Russian-held pocket on the west bank of the Dnipro River, including Kherson city, the only regional capital Russia had captured in nine months of war.

Ukrainian officials have so far mostly been wary in public, warning that Russians may still be planning to sow destruction on their way out.

Mykhail Podolyak, an adviser to President Volodymyr Zelenskyy, said on Thursday Russia wanted to turn Kherson into a “city of death”, mining everything from apartments to sewers and planning to shell the city from the other side of the river.

“This is what (the) ‘Russian world’ looks like: came, robbed, celebrated, killed ‘witnesses’, left ruins and left,” he wrote on Twitter.

Russia denies it abuses civilians despite bombarding residential areas throughout the conflict. It has been evacuating thousands of civilians from the Kherson area in recent weeks in what Ukraine calls a forced deportation.

At the front north of Kherson there was less artillery audible than usual. A heavy fog had settled in overnight, light snow fell and the ground was coated with frost. Ukrainian troops manning checkpoints were buttoned up against the cold.

Ukraine wants to inflict as much damage as possible on the Russian troops as they try to escape across the river, and Kyiv’s public caution may in part reflect its policy of maintaining silence about its own operations.

Mr. Zelenskyy himself mentioned Kherson just once in his daily overnight television address. Ukrainian forces were strengthening their positions “step by step” in the south, he said. “The enemy will make no gifts to us.”

Asked about Kherson in an interview with CNN aired on Thursday, Mr. Zelenskyy said he could not give details, because “I really want to have an unpleasant surprise for the enemy and not something that they’re prepared for”.

Russia’s retreat order, just over a month after President Vladimir Putin proclaimed the annexation of an area he said would be part of Russia forever, is one of the most humiliating defeats Moscow has suffered so far.

“I know for sure that this decision was not easy for anyone. Not for those who took it, nor for those of us who understood it would be so but still prayed it wouldn’t happen,” said Margarita Simonyan, head of RT, Russia’s international propaganda channel.

Defence Minister Sergei Shoigu was shown on TV on Wednesday giving the retreat order in response to advice from his top commander who said it was necessary to save the lives of troops who would be better able to defend the Dnipro’s opposite bank.

General Mark Milley, chairman of the U.S. joint chiefs of staff, said initial indicators suggested Russia was following through with its withdrawal, though it could take time to complete. U.S. President Joe Biden said the withdrawal showed there were “some real problems with the Russian military.”

Following Russian defeats in northern and eastern Ukraine, the retreat leaves Moscow with only limited gains to show for a “special military operation” that made it a pariah in the West and killed tens of thousands of its soldiers.

Russian forces are still holding on to other gains in the south, including a vital land route connecting Russia to the Crimea peninsula it seized in 2014, and cities in the east that they mostly obliterated while capturing them.

For Ukraine, which has endured nine months of bombardment and occupation that has killed thousands of its civilians, victory in Kherson would strengthen the case that it can defeat Russia on the battlefield, and may quiet some Western voices calling for it to negotiate a deal that would cede territory.

“This is a validation of Ukraine’s military strategy and the approach taken by its senior leadership. They are succeeding and the Russians know it,” tweeted Mick Ryan, a retired Australian general.

“Now is NOT the time to force Ukraine into negotiations. The Russians might be weakened but they are not giving up on their territorial aspirations. They will have to be beaten on the battlefield and pushed out of Ukraine.”