Himachal is witnessing pro-incumbency, there is no issue that has created resentment: Jai Ram Thakur 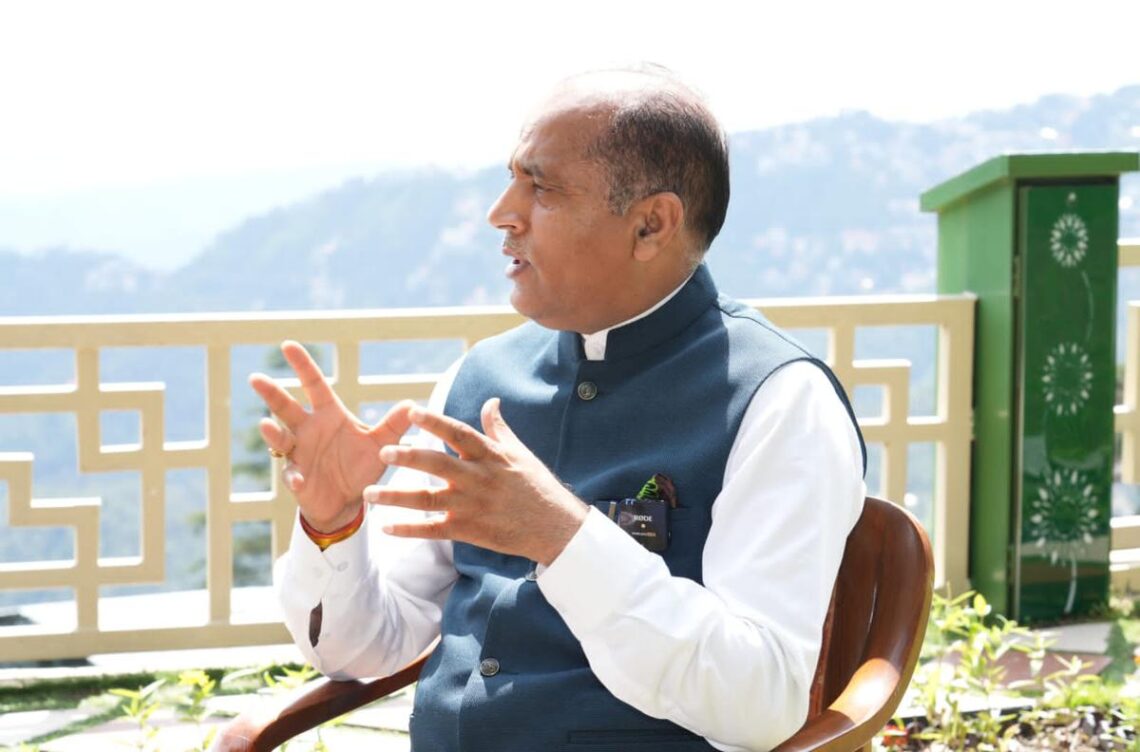 CM underlines the slew of schemes implemented by his government, flays the Opposition Congress for merely playing politics on issues like inflation, unemployment and the Old Pension Scheme

CM underlines the slew of schemes implemented by his government, flays the Opposition Congress for merely playing politics on issues like inflation, unemployment and the Old Pension Scheme

As the ruling Bharatiya Janata Party (BJP) aims to retain power in Himachal Pradesh with its ‘Mission Repeat’, Chief Minister Jai Ram Thakur asserts that the BJP’s battle is with the Congress. He says the Aam Aadmi Party (AAP) doesn’t even exist in Himachal and moreover, people have “lost confidence in AAP after their disappointing governance in neighbouring Punjab”.

In an exclusive interview with The Hindu, Mr. Thakur says the State is witnessing pro-incumbency and there is “positive atmosphere” for the “double engine” government”. Underlining the slew of schemes implemented by his government, he also flays the Opposition Congress for merely playing politics on issues like inflation, unemployment and the Old Pension Scheme.

What is the BJP’s key agenda to seek votes in the Assembly polls?

Our agenda has always been development and public welfare. In the last five years, despite the COVID pandemic, we have done a lot of developmental work. We have done things that even the six-time Chief Minister [late Virbhadra Singh] of the Congress party could not do. For the first time, ‘Ayushman’ and ‘HIMCARE’ schemes were introduced for the free medical treatment of people. Similarly, ‘Sahara Yojana’ [₹3,000 per month to patients suffering from fatal diseases] was run for the weaker sections and free domestic gas connections were given under ‘Ujjwala’ and ‘Grihini Suvidha Yojana’. The ‘Shagun Yojna’ had been introduced and financial assistance of ₹31,000 is given for the marriage of daughters of BPL families. All these schemes have been started for the first time and ₹1,033 crore spent on them. There are more than 10 lakh beneficiaries of these schemes. There is no Assembly constituency where development projects worth more than ₹150-200 crore has not been done. In doing development work, we did not involve in politics of discrimination and favouritism. I can say with confidence that never before has this much work been done in a single tenure.

Which according to you is a greater challenge for BJP in the election, the Congress or AAP?

BJP’s battle is with the Congress. The AAP doesn’t even exist in Himachal and moreover, the people have lost confidence in the AAP, after their disappointing governance in neighbouring Punjab. In the seven months of their regime in Punjab, they have ruined the State, be it the declining economy or on other fronts. The people in Himachal are well aware of the poor work of the AAP government in Punjab and are in no mood to support them in Himachal.

Do you think after five years in power, the BJP is facing anti-incumbency in Himachal Pradesh?

There’s no question of anti-incumbency. Instead, Himachal is witnessing pro-incumbency for the first time. I have been among the people for the last five years. I have gone to every Assembly constituency three to four times. I have been meeting people and based on their feedback, there is no issue that has created anger or resentment. Even Congress and AAP aren’t able to raise any issues against us.

The BJP lost byelections in 2021. What gives you the confidence of winning the Assembly election?

There is a different atmosphere during the Assembly elections whereas byelections are fought over other issues. In Mandi Lok Sabha seat, Congress sought votes as a tribute to its late leader Virbhadra Singh. And we also experimented in some seats. So the results were not in our favour. A year has passed and now you can see how positive the atmosphere is for the present government. The work of ‘double engine’ government gives us confidence.

Your opponents blame the BJP for failing to control inflation and create jobs, and for rise in corruption. How do you react?

Inflation and unemployment are complex and intertwined subjects. There has traditionally been a correlation between inflation and unemployment. If the Opposition has so much understanding of the subject, then why did they not contain inflation in Chhattisgarh and Rajasthan? Inflation is troubling the whole world today and I believe this period will not last long. But we have made sincere efforts to provide employment. For the past five years, we kept filling vacant posts in various government departments. The Congress government could not start any scheme to make youth self-reliant. But we started the ‘Swavalamban’ scheme – today in Himachal, more than 10,000 persons have got employment through this scheme. Despite the pandemic, we have been able to provide employment to about 60,000 people in the government and private sector.

The BJP has denied candidature to 11 MLAs including a Minister and shifted the constituencies of two Ministers. Opponents say the decision indicates that BJP has sensed defeat. What’s your take?

Seen this way, we can also say that the Congress has given tickets to faces rejected by the public in 2017. Today, when the Opposition has no issue, they will say anything. Our party style is different. The party conducts various surveys, discusses, and then decides on the candidates.

Are you in favour or against ‘freebies’- populist announcements of political parties?

There is a difference between ‘need’ and ‘revdi’ or ‘freebies’. For example, electricity is a need. On average, poor households use 100 to 120 units of electricity a month. A financially well-off family spends 200 to 300 units. We have tried to help the poor because it is their need [by making 125 units free]. But Congress does not want to help the poor. For example, they are promising to give money to women every month. But do they know how many women are in that age group? Do they know where the budget for that will come from? And most importantly, why have they not implemented a similar scheme in Rajasthan and Chhattisgarh? The answer is that the Congress leaders know they will not be able to deliver but still they make false promises.

Several government employees have been protesting and demanding the implementation of the Old Pension Scheme [OPS]. Don’t you think it will affect BJP’s electoral prospects?

I have been in Vidhan Sabha for 25 years and in politics for 30 years. During this time, employees have demonstrated against every government. As far as OPS is concerned, it was voluntarily closed by the then Congress government. Mr. Virbhadra Singh was the Chief Minister at that time and he implemented NPS from the back date. Later on, during 2012 to 2017, Congress was in power and even then he kept saying that restoring OPS was not practical. But we understood the problem of the employees and made the provision of family pension from the back date for the employees coming under NPS. We are trying to find a practical solution regarding the issue of OPS while Congress leaders are only playing politics with it. It is a fact that no State can implement OPS in the true sense without the help of the Central government. Congress is only spreading lies about OPS while we are considering this demand sensitively and seriously.

The Opposition has been pointing out that had the BJP government worked for the people, Prime Minister Narendra Modi would not have been brought in for aggressive campaigning. Your take?

Modi ji is our leader. Our double-engine government works under his leadership and guidance. The Prime Minister considers Himachal Pradesh his second home and the people also return the same love to him. Congress is troubled by this. They do not have any leader who understands Himachal. On the contrary, when the Congress government was at the Centre, they not only reduced the duration of the industrial package given by PM Atal Bihari Vajpayee but also snatched the Special Status of Himachal. But PM Modi gave back that Special Status. Besides, Himachal has been gifted medical colleges, AIIMS at Bilaspur, Bulk Drug Park, Medical Device Park etc., by the PM. In return, the people of Himachal will definitely give him a historic victory. Congress has also understood this and so it has started targeting the PM.