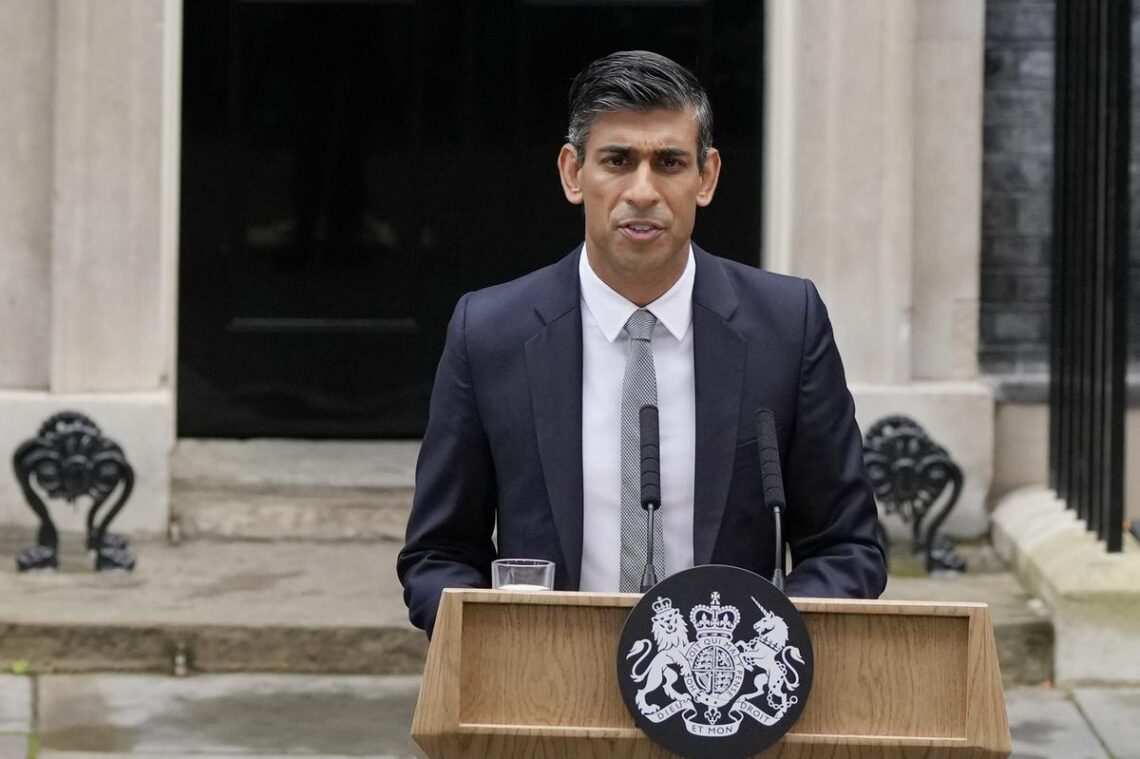 Britain’s new Prime Minister, Rishi Sunak, said on October 25, 2022 he would try to fix the mess left by his predecessor, restore faith in politics and tackle a “profound economic crisis” but warned the country there would be difficult decisions.

Standing in front of his Downing Street office, Mr. Sunak paid tribute to Liz Truss, whose economic programme roiled the markets, saying the mistakes she made were not “born of ill will or bad intentions”. Mr. Sunak spoke for five minutes and 56 seconds—longer than the time taken by nearly all of his predecessors when they made similar remarks at the start of their premiership, TheIndependent newspaper reported.

The one exception is Boris Johnson, who spoke for 11 minutes and 13 seconds in Downing Street after being appointed prime minister in 2019.

He also took aim at Mr. Johnson, by saying the mandate the Conservatives were handed at the 2019 election won by the former Prime Minister was not the property of one individual, and he would be guided by its promises.

“I want to pay tribute to my predecessor Liz Truss… Some mistakes were made. Not born of ill will or bad intentions. Quite the opposite in fact. But mistakes nonetheless,” he said.

“And I have been elected as leader of my party and your Prime Minister, in part to fix them. And that work begins immediately. I will place economic stability and confidence at the heart of this government’s agenda. This will mean difficult decisions to come.”

Appealing to a pubic facing rising energy and food prices, Mr. Sunak, one of the wealthiest lawmakers in Parliament, said he fully appreciated how hard things were for many.

When he was Treasury chief, Mr. Sunak became popular with the public by handing out billions in support to shuttered businesses and laid-off workers during the COVID-19 pandemic.

But now he will have to oversee tax hikes and public spending cuts as he tries to bring inflation and government debt under control.

Acknowledging “difficult decisions to come,” Mr. Sunak tried to draw a line under the chaos that engulfed Ms. Truss and her predecessor, Mr. Johnson. He said his government “will have integrity, professionalism and accountability at every level.”

“All I can say is that I am not daunted. I know the high office I have accepted and I hope to live up to its demands,” he said.

“So I stand here before you ready to lead our country into the future. To put your needs above politics, to reach out and build a government that represents the very best traditions of my party. Together we can achieve incredible things.”

Mr. Sunak’s top priorities will be appointing Cabinet ministers, and preparing for a budget statement that will set out how the government plans to come up with billions of pounds (dollars) to fill a fiscal hole created by soaring inflation and a sluggish economy — and exacerbated by Ms. Truss’ destabilizing time in office.

That statement, set to feature tax increases and spending cuts, is currently due to be made in Parliament on Monday by Treasury chief Jeremy Hunt — if Mr. Sunak keeps him in the job.

Ms. Truss departed Tuesday after making a defiant public statement outside 10 Downing Street, seven weeks to the day after she was appointed Prime Minister. She announced her resignation on Thursday, acknowledging she could not deliver on her economic plans.

In her departing words Ms. Truss offered a defense of her low-tax vision and her brief term in office — despite the market mayhem triggered by her September 23 budget package.

“I am more convinced than ever that we need to be bold and confront the problems we face,” she said, before wishing Mr. Sunak success as “our country continues to battle through a storm.”

Mr. Sunak was chosen as Conservative leader after becoming the only candidate to clear the hurdle of 100 nominations from fellow lawmakers to run in the party election. Mr. Sunak defeated rival Penny Mordaunt, who may get a job in his government, and the ousted Mr. Johnson, who dashed back from a Caribbean vacation to rally support for a comeback bid but failed to get enough backing to run.