Opinion: Secularism in Crises in India

by Puneet Chopra
in Opinion, Social Issues
Reading Time: 5 mins read
A A

In a secular state every person has a right to practice their religion. Religion in its essence teaches tolerance and humanity before anything. Source- The Indianexpress (Illustration: Suvajit Dey)

“WE THE PEOPLE  OF INDIA, having solemny resolved to constitute India into a Sovereign Socialist Secular Democratic Republic and to secure to all its citizens

EQUALITY of status and of opportunity;

and to promote among them all

FRATERNITY assuring the dignity of the individual and the unity and integrity of the Nation;

IN OUR CONSTITUENT ASSEMBLY this twenty-sixth day of November, 1949, do HEREBY ADOPT, ENACT AND GIVE TO OURSELVES THIS CONSTITUTION.”

This is the Preamble to our Indian Constitution, which was written to provide equal protection to all citizens and to protect their religious freedom. But some may have a problem with the word “secularism” as it was added later by, The bill for the Constitution (Forty-second Amendment) Act, 1976 which was introduced in the Lok Sabha on 1 September 1976, as the Constitution (Forty-Second Amendment) Bill, 1976 (Bill No. 91 of 1976).

But, it is believed that the Indira Gandhi government incorporated secularism during the post-emergency era in the preamble with an aim to retain Muslim support which was eroding from her, not as an assurance and promise of equality to all citizens.

The most general concept of secularism is “the division of faith from public relations or from the state.” But what does it mean in a country like INDIA, where our society is more emotional and religious than the west’s?

In India, secularism, in my view, means a state that accepts or engages in the affairs of all religious communities in a balanced manner. Secularism is the concept of empathy, of accepting other people’s points of view and at least attempting to consider them. Everyone has the freedom to exercise their faith in a secular society. What is the point of fighting for faith when religion teaches peace and humanity first and foremost? Respect for all religions is what secularism entails. You may or may not agree with their views, but it does not earn you the right to mock, bully, or target them or their convictions.

What’s changed between the relation of secularism and the state.

Let me begin by telling you the history. There was a time when the Prime Minister would be concerned that the appearance of government at a Somnath Temple event would not reflect well on a secular nation and would be inappropriate for the country. The Prime Minister would also go so far as to argue with the President over the President’s desire to enter the Temple’s “Renovated collections” feature. The President, on the other hand, did attend the event.

However, if we look at the dates 5 August 2020 and 10 December 2020, we can see that the government celebrated and intertwined civil relations and religion on that day. It gave it a distinct personality. It was more than just a routine event. It seems to be a signal indicating that the state is not neutral. Faizan Mustfa has written a fantastic article that you can read. Minorities are often fed up with the pretense of secularism.

There was, is, and could be a dispute about whether the New Parliament, which is a Constitutional building, a public property, built with tax payers’ money and comprises all citizens of this country, people of any religion, class, and culture, has a “Ground Breaking Ceremony” or whether it should have been prevented.

The biggest consequence of such practices is the effect they have on minorities after the CAA and the repeal of ACT 370. These things do not build trust or close gaps between societies; instead, they only isolate and polarise society.

SECULARISM IN CRISIS IN INDIA

If you follow even a little news or have apolitical thoughts, you should be aware of this by now. You must have grasped one point. When the extremist groups in society become fearless of the state, or when people feel a sense of fear within themselves, or when people subconsciously think that the state is empowering extreme groups of society, secularism is in jeopardy. When there are hate speeches all over you, packed with offensive words and aimed at all of society’s liberal ideals. Then there’s the crisis of secularism.

Let me put some examples of cases among you.

Recently, A Muslim boy was severely beaten for drinking water in Ghaziabad’s Dasna temple after he accidentally went to a temple, has a banner put on that non-Hindus can not enter. 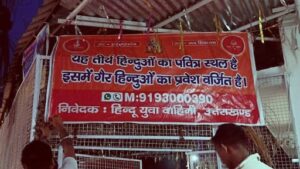 Later Banners in Uttrakhand was put on outside 150-200 temples  ‘banning the entry of non-Hindus’ in support to the temple head priest by Hindu Yuva Vahini. Later, some Banners were removed by the police, and in one case police filed a complaint against the person whose number was on the banner.

A very popular case of Munawar Faruqi, a comedian put behind bars for allegedly trying to crack a joke which is offensive to Hindu sentiments. Later got bail after one month from the Supreme court.

In another incident last month, Some Nuns were Accused of Conversion, forced off train. Later it was established that there was no conversion involved. After which, Kerala CM Pinarayi Vijayan wrote Home Minister asking for strict action. These are just two recent examples you can find many. These things create an atmosphere of fear of tension in society. And in that society, Secularism is in crisis.

What do these incidents say?

It claims that societal intolerance is at an all-time high, that the principle of love has been replaced with “Love Jihad,” which promotes a concept based on hatred, and that the legislation has been heavily criticised that many of the individuals charged with these crimes were found to be innocent.

It reflects the extent to which our social fabric has been ripped apart. How much hatred has been poured into our lovely INDIA! It also demonstrates how feeble our opposition parties are since they do not seem to have the ability to lift these questions or to advocate for secular and liberal ideals. It also demonstrates how the media has become a tool by influential figures, and how the influence of social media has been abused. Digital Journalism vs. Mainstream Media is a detailed article.

When the narrative is that protesting Sikh farmers are khalistani or Pakistani, rather than people fighting for and demanding their rights. When they believe the government is treating them unfairly. Then there’s the crisis of secularism.

The two wheels of a loop on which liberal, secular ideas and a modern country are run are democracy and secularism. Will democracy endure if secularism were abolished? This is a question we must ask ourselves.

World view on our country’s  Secularism and on our Democracy

In its 2020 survey, the United States Commission on International Religious Freedom (USCIRF) downgraded India’s rating. India was ranked in the report’s Countries of Particular Concern (CPC) category, which is the lowest on the list. China, North Korea, and Saudi Arabia are among the countries listed in the survey.

India dropped from “Free” to “Partly Free” status, According to US-based non-profit Freedom House in its latest ‘Freedom in the World 2021’. While Kashmir was assessed as “NOT FREE”. The report also included the government crackdown on farmer protests.

This is yet another proof of how Secularism and Democracy are not co-existing together. Last year world saw and recognized our state of religious freedom, our government crack on dissent, on freedom of speech. They also noted how secular values are in danger.

All of this indicates that in India, secularism and constitutional traditions are facing difficult times. Stopping hate politics and promoting love and peace in society are the only ways to protect these ideals. This is the best way for our civilization to advance and coexist.